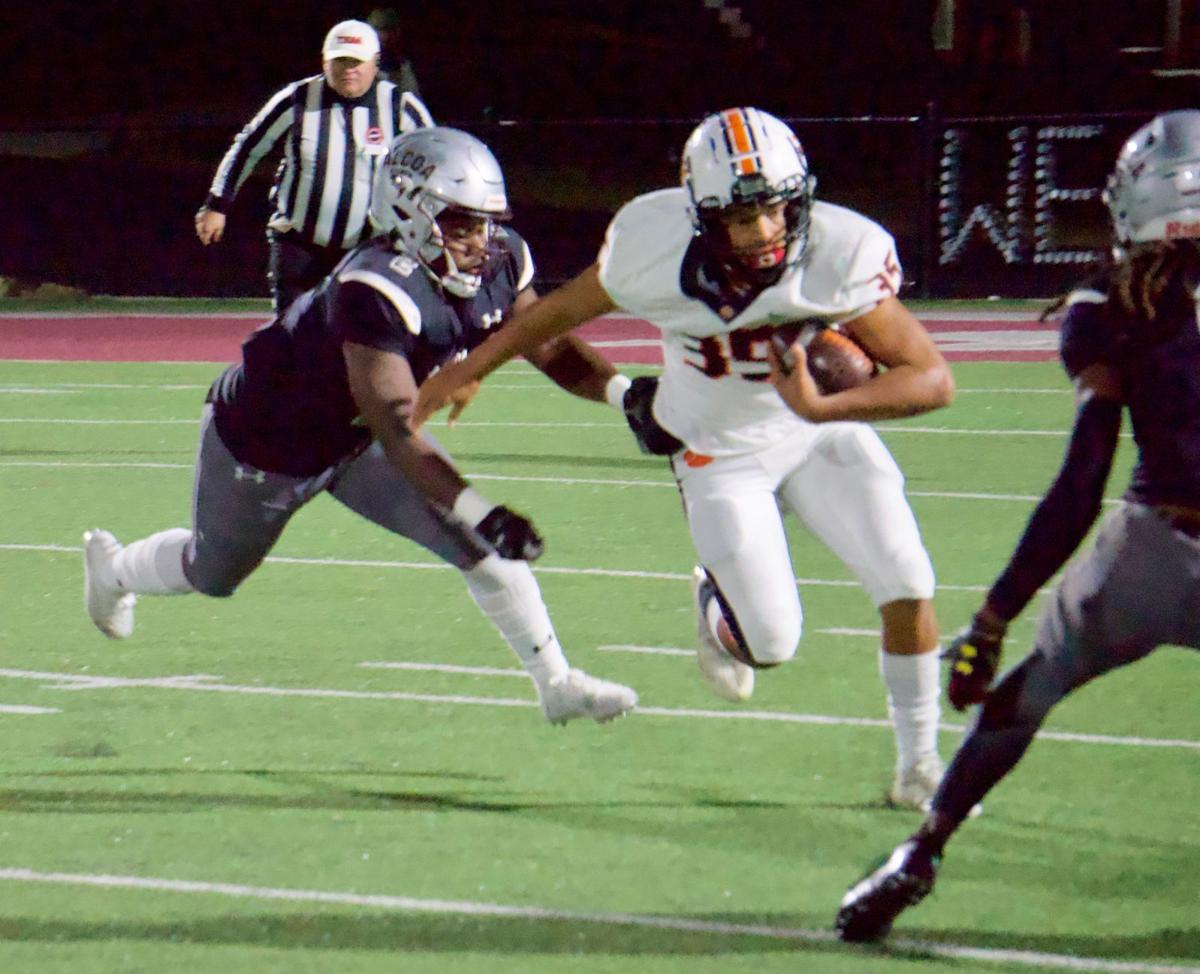 Above: Pigeon Forge running back Aidan Littles runs wide left for a gain during Friday night’s game with Alcoa. Left: Pigeon Forge coach Scott Meadows encourages his team after a disappointing playoff loss Friday night. Meadows’ Tigers made it further in the playoffs than any previous PF football team. 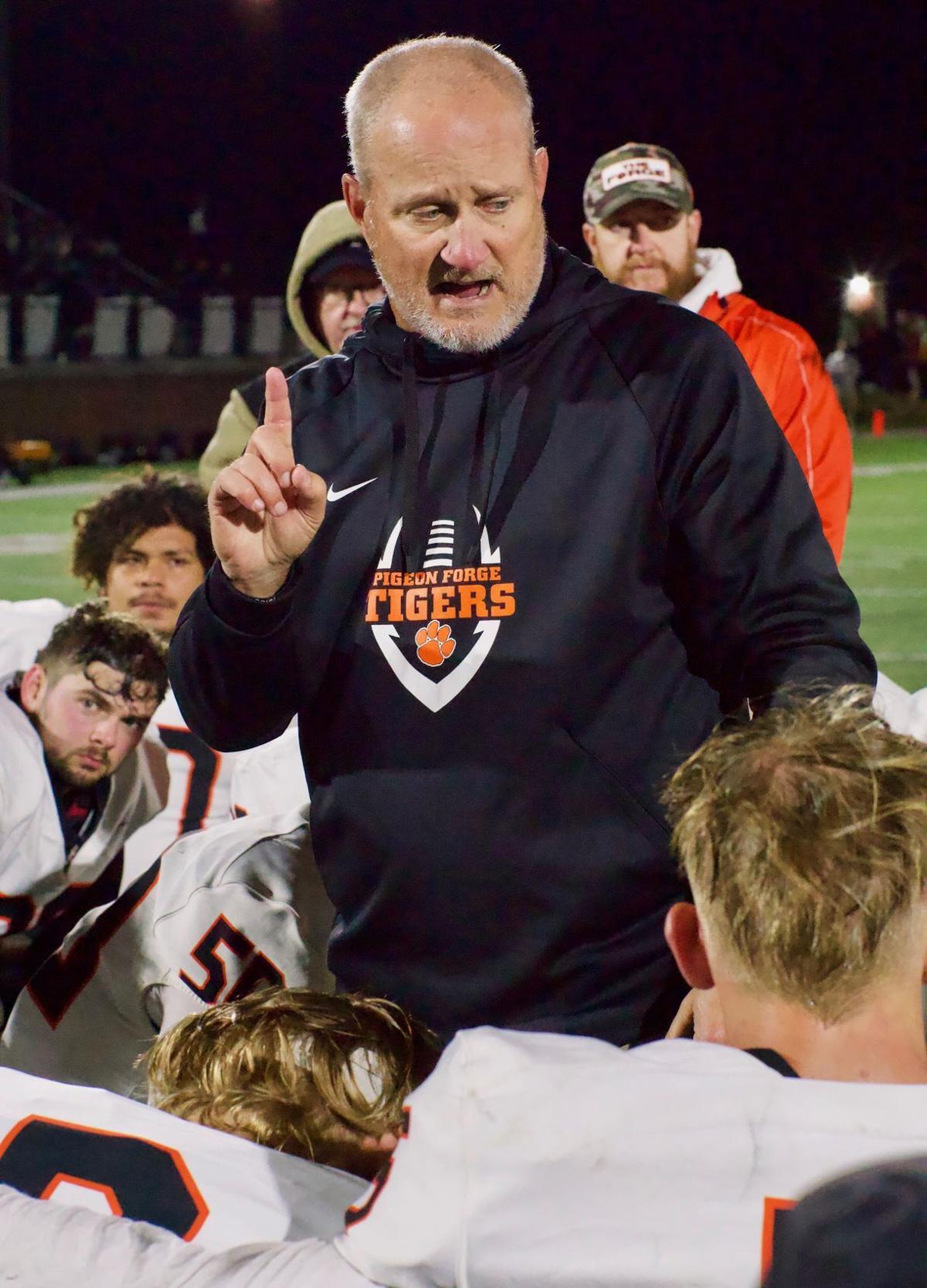 Pigeon Forge coach Scott Meadows encourages his team after a disappointing playoff loss Friday night. Meadows' Tigers made it further in the playoffs than any previous PF football team.

Above: Pigeon Forge running back Aidan Littles runs wide left for a gain during Friday night’s game with Alcoa. Left: Pigeon Forge coach Scott Meadows encourages his team after a disappointing playoff loss Friday night. Meadows’ Tigers made it further in the playoffs than any previous PF football team.

Pigeon Forge coach Scott Meadows encourages his team after a disappointing playoff loss Friday night. Meadows' Tigers made it further in the playoffs than any previous PF football team.

ALCOA — One of the best teams in Pigeon Forge High School history met up with Class 3A juggernaut Alcoa Friday night in the quarterfinals of the TSSAA football playoffs.

The results were not pretty.

The Tornadoes (12-1 overall) scored on every first-half possession and led 42-0 at halftime before cruising to the eventual 52-0 final score.

The Tigers, making an appearance in the playoffs’ third round for the first time ever, were outmatched but fought until the game’s final whistle, making head coach Scott Meadows proud.

“Do not walk off this field with your head down, because you’ve got to think about everything that you’ve accomplished,” Meadows said to his team just after the game. “I’m super proud of you, and I love you to death.

“This is nothing to be ashamed of,” Meadows continued. “Guys, you were in the quarterfinals of the state — you were one of eight teams left. You ran into a group down here, that’s as good as anybody I’ve seen in … years. That’s just the way it is.”

The coach stressed to his young players that they must build on what this team’s seniors have built if they want the program to take the next step.

“I would like to meet them again in the quarterfinals next year,” Meadows said. “Be proud of what you’ve done … (and) underclassmen, do not be satisfied. Continue to build on what these guys have done.”

Like so many teams before them, the Tigers came into Alcoa knowing they’d be facing one of the state’s best teams, regardless of classification.

The five-time defending state champion Tornadoes haven’t been scored on since Sept. 23, shutting out opponents Cookeville, Tyler Academy, Austin-East and Gatlinburg-Pittman — who they beat last week 63-0 in the playoffs’ second round. The streak also includes a pair of COVID-19 forfeits, when teams couldn’t take the field against the Tornadoes due to illness.

And beyond that dominant defense is an offense with seemingly limitless weapons.

On Friday night, Alcoa didn’t face a third-down until they were already leading 49-0 in the fourth quarter.

“They’re a tremendous football team,” Meadows said. “They haven’t been scored on in two months. They’re loaded at every position.

“In order for us to go to another level, they’ve set the bar way high. We’ve got to get to work and do better next year.”

A season to remember

In spite of the tough loss on Friday, the players on the 2021 Pigeon Forge Tigers’ football team have created years of memories to treasure going forward. They’ve also created a new legacy within the program, totaling a 16-7 record over the last two seasons after going just 2-18 in the previous two.

“Those first two seasons were kind of rough, but the goal was to get better every day … it was about building something for Pigeon Forge,” senior defensive back Noah Dyer said. That was our goal since freshman year.”

Boise State gets shut out in second half, gives up lead in 27-16 loss at No. 21 San Diego State

Staff picks against the spread, over/under for Arizona-ASU and other Pac-12 rivalry games

Field Pass: Everything you need to know about Saturday's Territorial Cup game between Arizona and ASU

Last year there were signs things were improving, as the team fielded a competitive squad and improved to seven victories.

This year, things got even better.

“It was a great season,” said Noah Dyer, a PFHS senior. “It was fun, and we made a lot of memories. We gave it everything we had.”

“It was previously five (wins),” senior Brady Maples said, reflecting on the season that was. “We matched that against G-P, and then we won two in the playoffs. So seven in a row is the (new) record.”

The team also tied its record for wins in a season (9), equaling the previous best set in Meadows’ first stint at the helm of the Tigers.

Maples credited the team buying into Meadows’ plans for the team.

“It was a mix of everyone working with Coach Meadows, doing what all he tells (us to do),” Maples said. “(And) chemistry … we were all together as one team this year. Everybody knew their role is what it came down to … this year we really bought into everything the coaches said.”

The coaches’ effort to inspire the team and connect on a deeper level helped spur that change.

“The coaching staff, they’re great men, (and) they’re great coaches,” Dyer said. “(And) the attitude (Coach Meadows) brings with the team is that we’re going to go out there and compete. We don’t care who it is.”

“He told us the other day, never let somebody think that they’re better than you. Go out there and play, and give it effort. He’s more than just a coach, he teaches us a lot more than football.”

That all adds up to a new direction for Pigeon Forge football, and Maples and Dyer believe the new direction has been cemented in the new culture established for the orange and black.

“This year we didn’t have anyone talking back to coaches,” Maples said. “Everybody just bought into (the program). Everybody knew what their job was.

“Coach Meadows told us last year the team set the foundation and we had to build on it, and we knew what we had (to do) with the season,” Maples said.

“I think we did well, and I hope the players next year can continue to build on it. Coach Meadows has come in and turned it around once again. I think it could turn into a pretty successful team every year.”

“That has been my main goal and my friends’ goal,” Dyer said. “To build something for Pigeon Forge.”