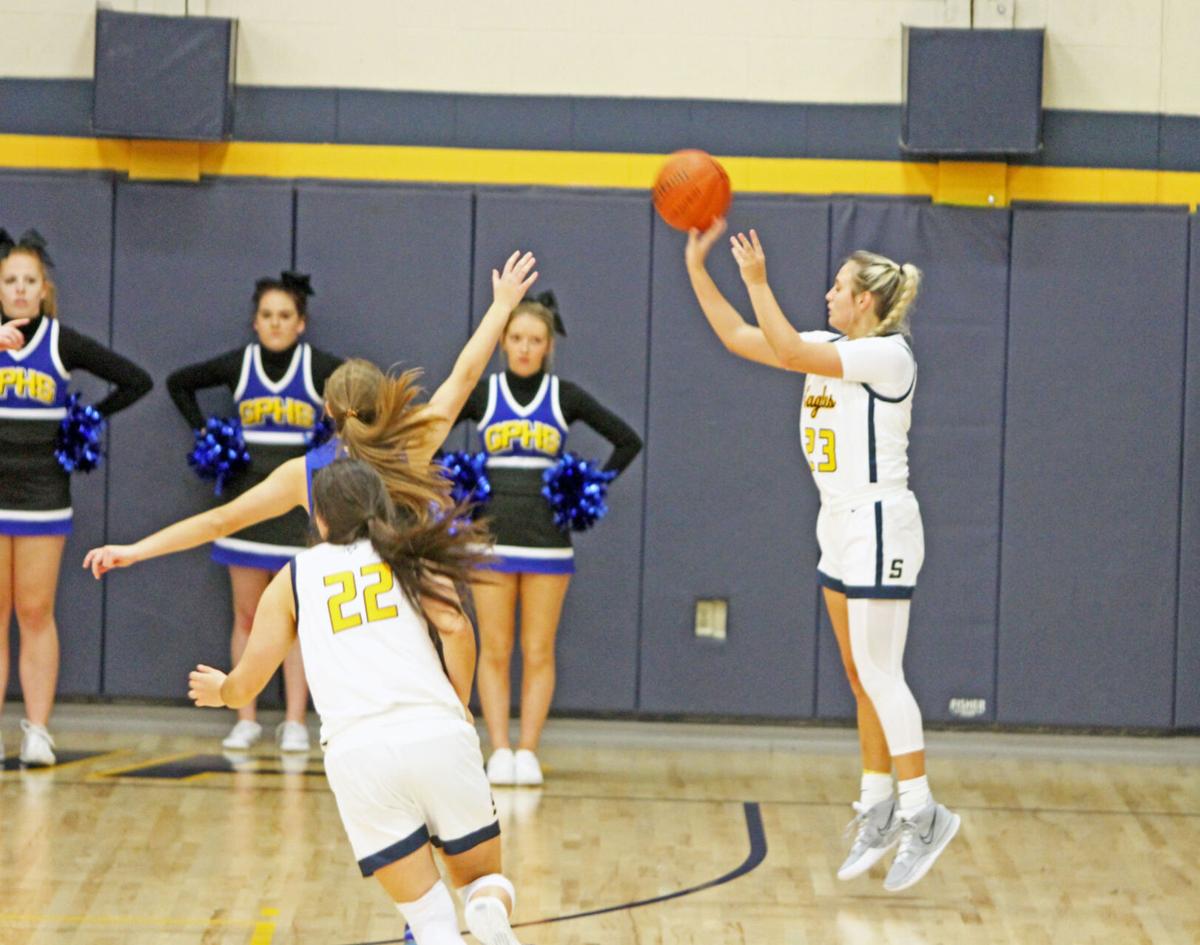 Seymour’s Caiden Russell shoots a 3-pointer in the Lady Eagles’ loss to Gatlinburg-Pittman on Tuesday night. 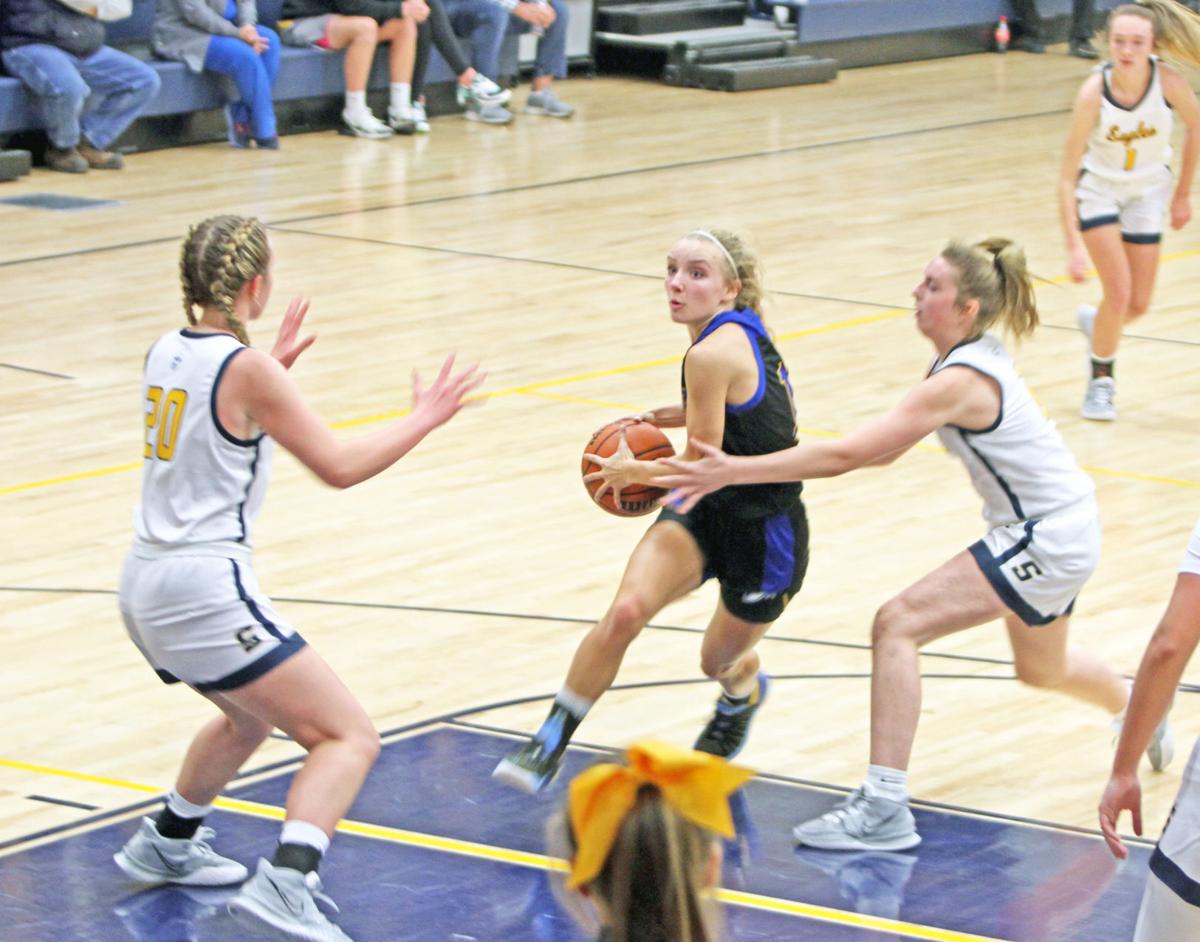 Gatlinburg-Pittman’s Lily Stinnett drives the lane in the Lady Highlanders’ win over Seymour on Tuesday night.

Seymour’s Caiden Russell shoots a 3-pointer in the Lady Eagles’ loss to Gatlinburg-Pittman on Tuesday night.

Gatlinburg-Pittman’s Lily Stinnett drives the lane in the Lady Highlanders’ win over Seymour on Tuesday night.

SEYMOUR — Gatlinburg-Pittman gave Seymour multiple chances on Tuesday night in the final minute of their county contest, but the Lady Eagles couldn’t capitalize and the Lady Highlanders barely hung on to earn a 37-35 victory.

The Lady Eagles fouled Gatlinburg-Pittman’s Leah Stinnett with under 10 seconds to go in the game, but she missed both free throws, keeping the score at 37-35.

As Seymour rushed the ball up the court for a last second shot, they turned it over and fouled Stinnett again.

She missed both free throws again with under a second left in the game, but as she went for a rebound on the second miss, she fouled Seymour’s Kaylyn Jarvis as time expired.

With no time left, Jarvis had a chance to send the game to overtime, but she missed the front end of a one-and-one to end the thriller of a game.

“It was definitely an ugly game where we had too many turnovers,” Gatlinburg-Pittman head coach Katie Moore said. “We figured out a way to win. I think Seymour did a really good job of making us make poor decisions with the basketball, and they did a good job on the boards. They worked hard than us for the whole 32 minutes, but ultimately, we found a way to win which is hard to do with a young team.”

Both teams struggled at the line all night long as they went a combined 14-32 from the charity stripe, but the Lady Highlanders (2-0) had sophomore post Maddy Newman and she was the difference maker.

Newman finished with over half of Gatlinburg-Pittman’s points, 19, including eight of the team’s 10 points in the fourth quarter.

“You can’t give them extra possessions when they have a big that they are trying to get the ball to like Newman,” Seymour head coach Greg Hernandez said. “The whole game plan was for her to not beat us. She got the better of us toward the end which gave the the lead late.”

In what was a close game throughout, both teams missed several key lay ups and gave up offensive boards, but it was the Lady Highlanders who came from behind after trailing 15-10 at the end of the first quarter and 20-19 at the half.

Hernandez wants his team to learn to value every possession, especially in such close games, and he hopes that the Lady Eagles (2-1) don’t make the same mistakes again.

“This is a game that you need to take advantage of when you playing against a good team to get quality reps for kids that haven’t been put in this position before,” he said. “For us to get Caiden Russell to handle the ball late and have Jaden Cummings knock down a couple shots, it only can help them.”

“There are a lot of positives,” Hernandez said. “When you hold a team to 37 points, you should have opportunities to win the game. We had those opportunities, but we made some mistakes and we didn’t help ourself at the free throw line. We had a couple turnovers late unforced where we gave them extra possessions.”

For Gatlinburg-Pittman, after Newman, Steffi Johnson was their second leading scorer with six points.

“The girls have done a good job of stepping up to the competition,” Moore said. “With us coming out and competing against some bigger schools, it says a lot about our character. It looks positive going district games.”