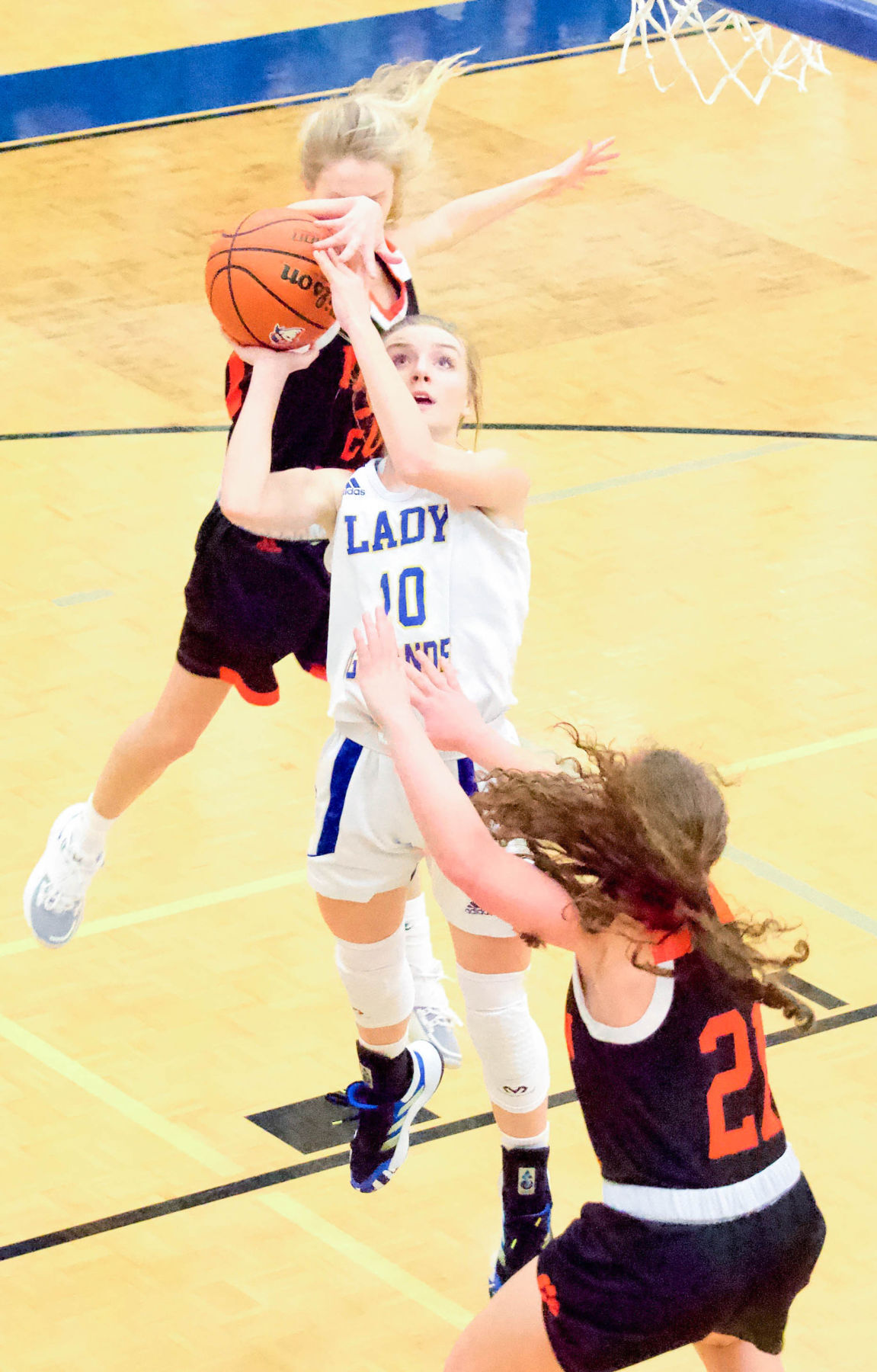 Pigeon Forge’s Madelyn Hawkins gets a hand on a fast break layup attempt from G-P’s Lily Stinnett in the first quarter of the Lady Highlanders’ semifinal victory. 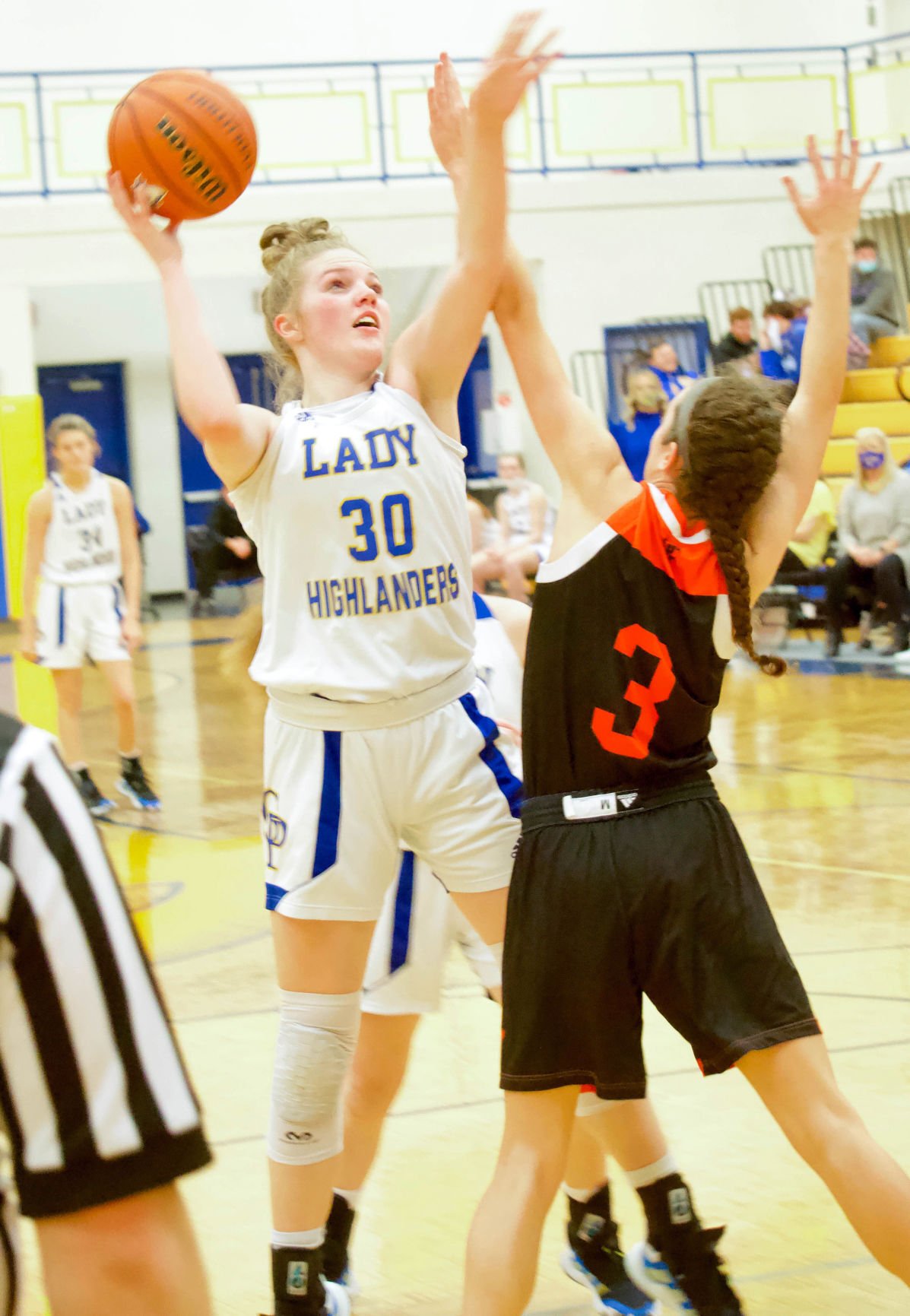 Maddy Newman gets a second-half shot over Pigeon Forge's Sarah Teaster Friday night. Newman finished with a game-high 22 points in the G-P win.

Pigeon Forge’s Madelyn Hawkins gets a hand on a fast break layup attempt from G-P’s Lily Stinnett in the first quarter of the Lady Highlanders’ semifinal victory.

Maddy Newman gets a second-half shot over Pigeon Forge's Sarah Teaster Friday night. Newman finished with a game-high 22 points in the G-P win.

GATLINBURG — It wouldn’t be the District 3-AA championship game without the Gatlinburg-PIttman Lady Highlanders.

The girls in blue and gold earned a spot in their ninth-straight district championship game Friday night with a convincing 59-42 win over rival Pigeon Forge.

The Lady Tigers wouldn’t go down without a fight, however, and early on it looked as though the game could go down to the wire. Pigeon Forge, which had lost by a combined 39 points to G-P in two regular-season matchups, started the game off hot against the heavily favored Lady Highlanders.

Kailee Bradley hit a pair of 3-pointers and Sarah Teaster added another to help Pigeon Forge get out to a surprising 12-10 lead with two minutes to go in the opening quarter.

An inside bucket from G-P’s Maddy Newman and five-straight points from Leah Stinnett, however, lifted the Lady Highlanders back to a 17-12 advantage before PF guard Halle Hensley hit a 3-pointer from the left wing just before time expired to narrow the lead to 17-15.

“It’s really hard to go eight days without playing a game,” G-P coach Katie Moore said after the game, “so I thought that we might start off slow. But I also thought (PF coach) Emory (Cain) did a great job adjusting his defense to what he felt like our strengths were — which is obviously inside. And I thought it took a little bit for our girls to adjust.”

In spite of PF’s stellar early play, by halftime G-P’s advantage stood at 26-19.

“In the second half we were able to make those adjustments,” Moore said, “and I think that that really helped us make that run in the third quarter.”

An 8-0 run early in the period set the tone for the second half, as the team’s dual six-footers, Newman and Taylor Reed, clogged the post and took control of the lane.

By the end of the third, what had been a seven-point lead had swelled to 43-30.

“They’re really big, and we had a hard time keeping them off the offensive glass,” PF’s Cain said of the Lady Highlanders. “We played our zone a little bit different tonight, too, to try and double-down on their bigs, but the Newman girl still had a big night. They have a lot of weapons, but I’m proud of my girls for fighting.”

The fiery Tigers sought a comeback in the fourth, but G-P’s size advantage and talent proved too great a deficit. By halfway through the quarter — behind hot shooting from Leah Stinnett and 5-for-6 from the charity stripe for Newman — the Lady Highlanders led by 17. And that’s where the deficit would ultimately end at 59-42.

“We just didn’t shoot it well down the stretch and I thought we made a few mental mistakes that we usually don’t make,” Cain said. “But in a big game sometimes that happens.”

G-P’s Newman led all scorers in the game with 22 points, tallying 11 points in each half.

Lilly Stinnett was the Highlanders’ second leading-scorer, as she notched seven points in both the first and final quarters for 14 total.

Sydney McCarty was also in double-figures with 12, while Reed added nine and Bailey Lane had another 2 for G-P.

Hensley was the Lady Tigers’ top scorer with 14. Only three other PF players found the net in the game: Bradley had 11, including a trio of 3-pointers; Ana Naas had 9; and Sarah Teaster scored 8 in the loss.

The Lady Tigers took on Union County Monday on night in the District 3-AA consolation game for third place.