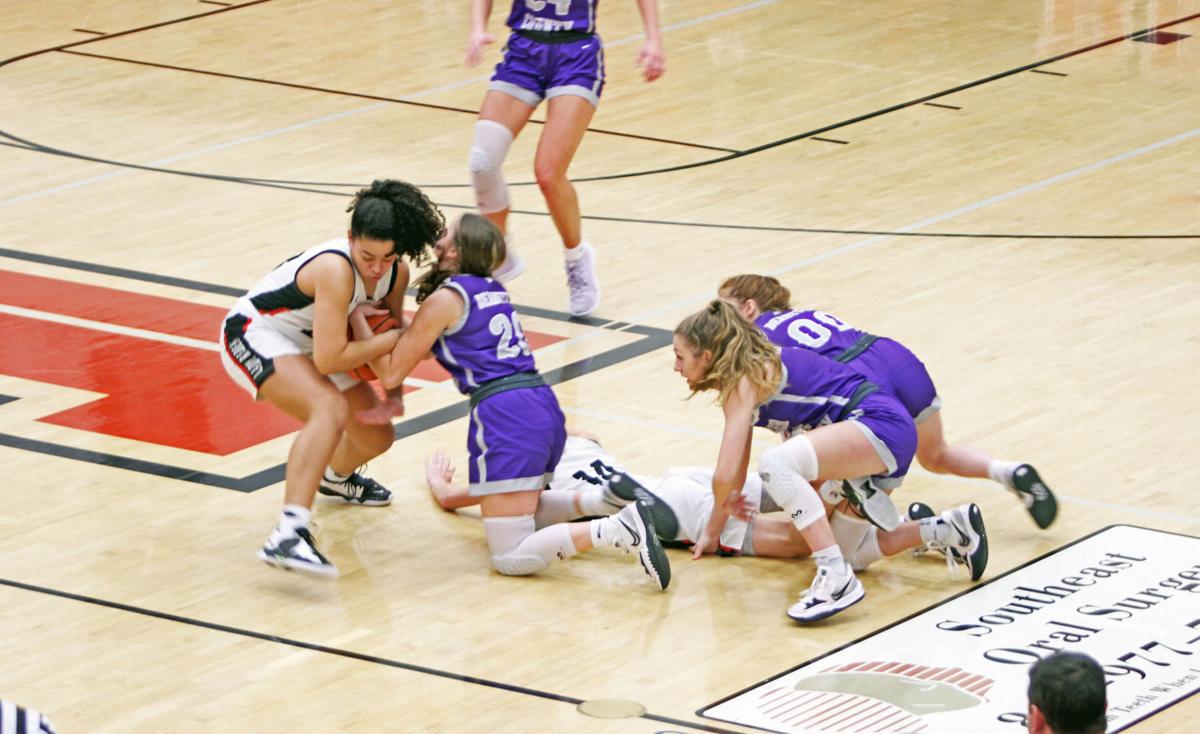 Kinley Loveday tries to tie up a Maryville player for a jump ball in the Bearettes’ three point win over the Lady Rebels on Thursday night. 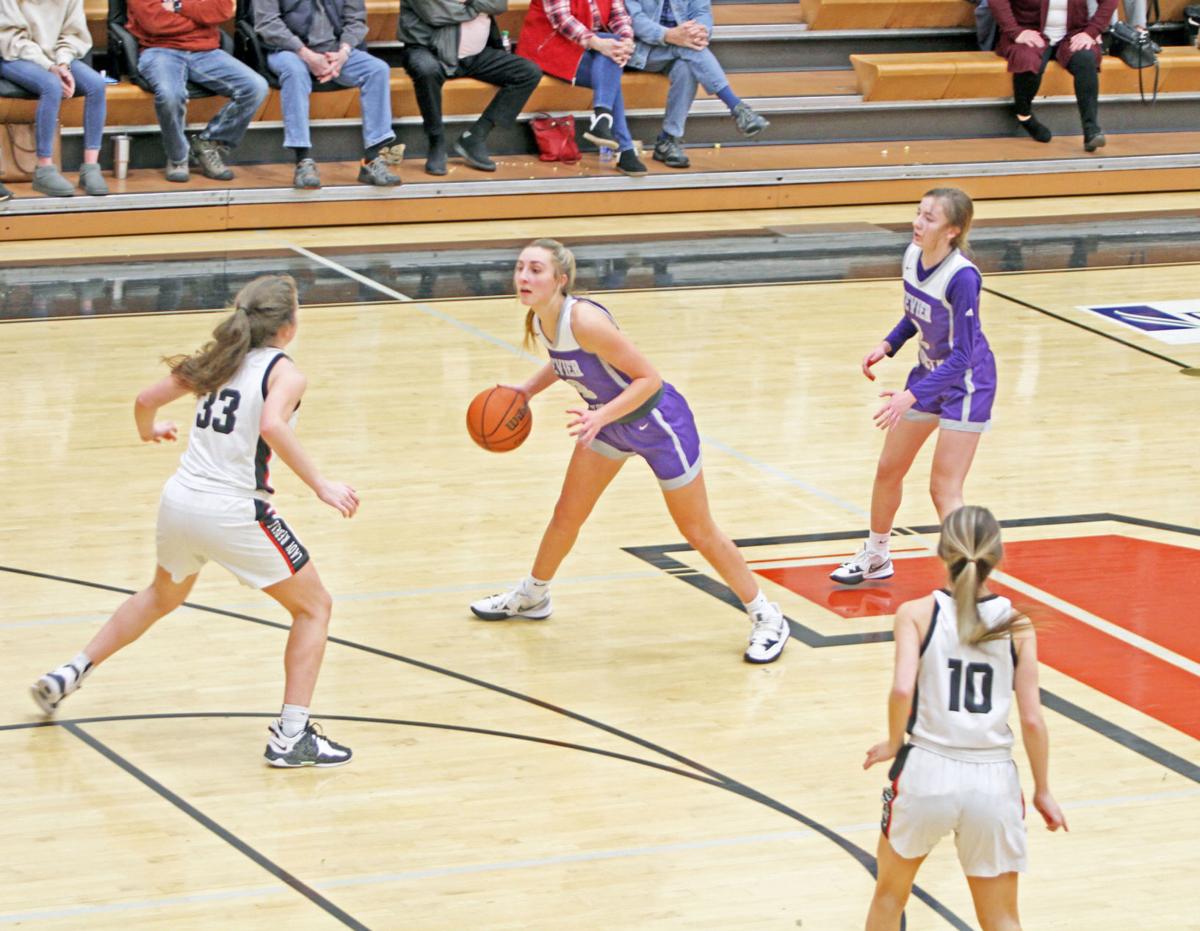 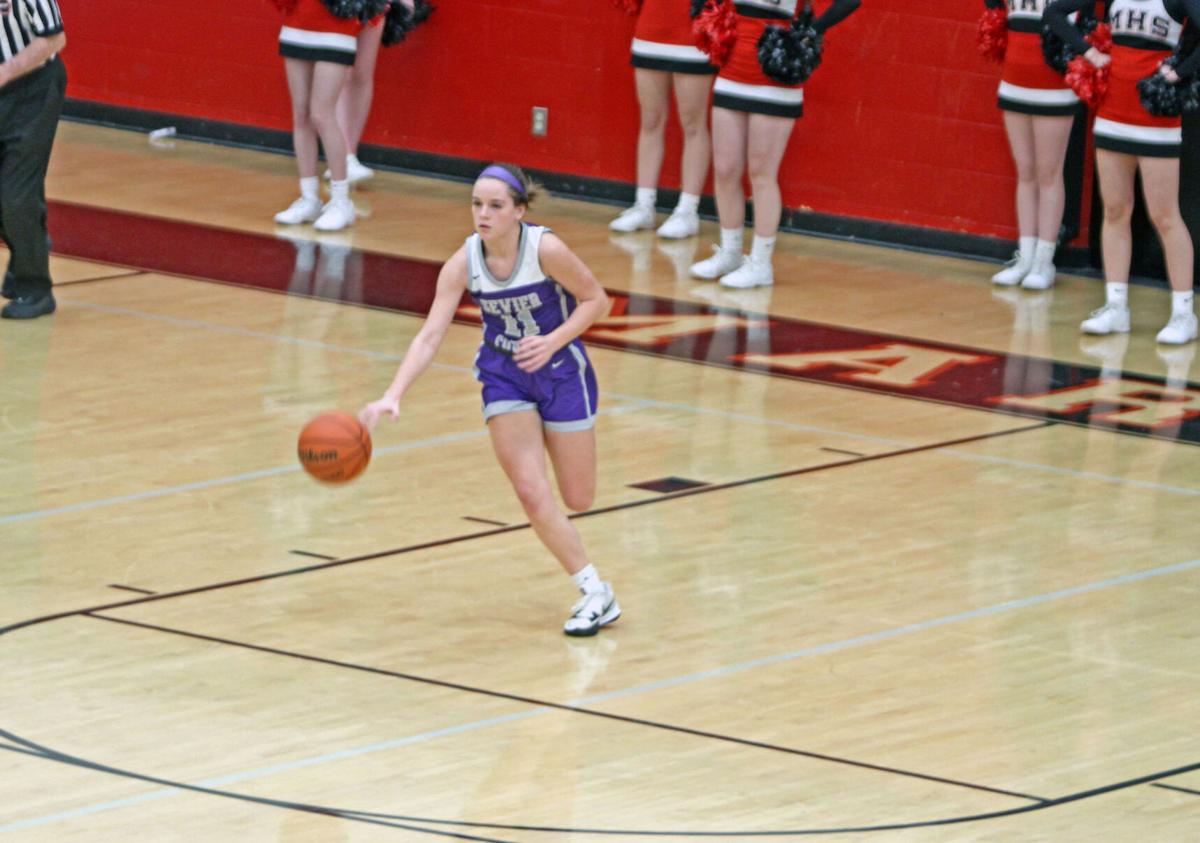 Sevier County’s Emma Fowler brings the ball up the court in the Bearettes’ win over Maryville on Thursday night. Fowler hit four big three pointers in the second half to help Sevier County capture the come from behind win.

Kinley Loveday tries to tie up a Maryville player for a jump ball in the Bearettes’ three point win over the Lady Rebels on Thursday night.

Sevier County’s Emma Fowler brings the ball up the court in the Bearettes’ win over Maryville on Thursday night. Fowler hit four big three pointers in the second half to help Sevier County capture the come from behind win.

MARYVILLE — Sevier County struggled tremendously on offense in the first half on Thursday night at Maryville, but that didn’t impact their defense as the Bearettes held the Lady Rebels to only 18 points in the first half and trailed 18-15 going into the second half.

Maryville extended their lead to as many as nine, 32-23, in the third quarter, but Sevier County stormed back to take a lead with less than two minutes left in the game before winning in overtime, 55-52.

Over the course of the final 1:37 in regulation, the lead changed hands five times, but the Bearettes did have a chance to win with no time left on the clock.

Maryville knocked down two free throws with four seconds left to tie the game at 49, and then guard Kinley Loveday was fouled as time expired, sending her to the line only needing to make one of the two to win.

She missed both though, and Sevier County had to hang on in overtime.

The Bearettes (15-4 overall) did not make a field goal in the four minute overtime, but Loveday did redeem herself by making five of eight free throws after regulation.

Overall, Sevier County went 17-28 from the charity stripe in the win which is just over 60%.

“It was a high pressure situation, but if we had hit more free throws before the end of regulation then we are probably not in that situation. We were though, and the girls bounced back,” Sevier County head coach Jonathan Shultz said.

“I tell them all the time that one play or shot never determines a game. You can go back and look at the other free throws that we missed in the game. When you are struggling to score like we were, especially in the first half, if you get opportunities at the line then you need to convert. I was proud of how the girls battled through.”

Maryville did hit the only field goal in overtime with seven seconds left, but Loveday made two free throws with one second left and the Lady Rebels didn’t get a shot up to end the game.

“When we huddled up going into overtime, I kept hearing the girls say ‘we got this.’ They knew that we had fought hard to get back in the game just to tie it up,” Shultz said. “They felt confident that we would pull it out. That gave Kinley confidence.”

Down in the second half, Sevier County had to rally and they used four big performances from Loveday, Hailey Williams, Emma Fowler and Cybil Penland.

Fowler hit four threes in the half, and she gave them the lead with 1:37 to go in the game.

The four girls combined to score 54 of the Bearettes 55 points as Loveday led the way with 20.

In overtime, Sevier County shorthanded one of their scorers in Penland as she was unable to play due to fouling out, but nonetheless, the Bearettes got the job done.

“If it wasn’t for how Kinley played especially in the second half, then we wouldn’t have come back and forced overtime,” Shultz said. “She played her heart out and led the charge for us to get back in it. Hailey Williams started converting on offense, and then Emma Fowler hit four big three pointers for us that kept us in it.”