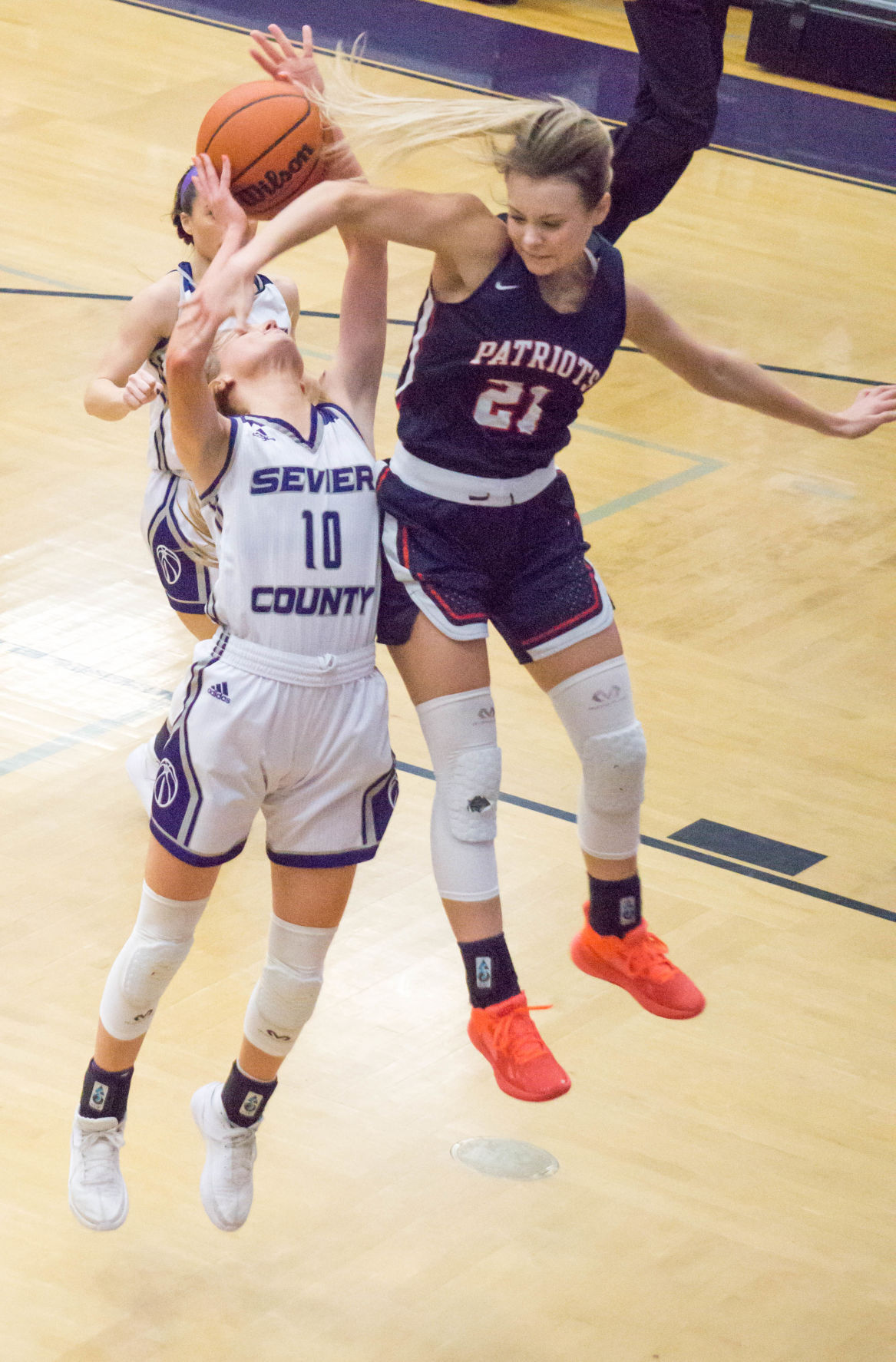 {span}Sevier County’s Mackenna Loveday is fouled by Lady Patriots player Makenzie Alvey on a fourth-quarter drive to the basket Saturday night. Loveday was 3-for-4 from the stripe in the final period of play.{/span} 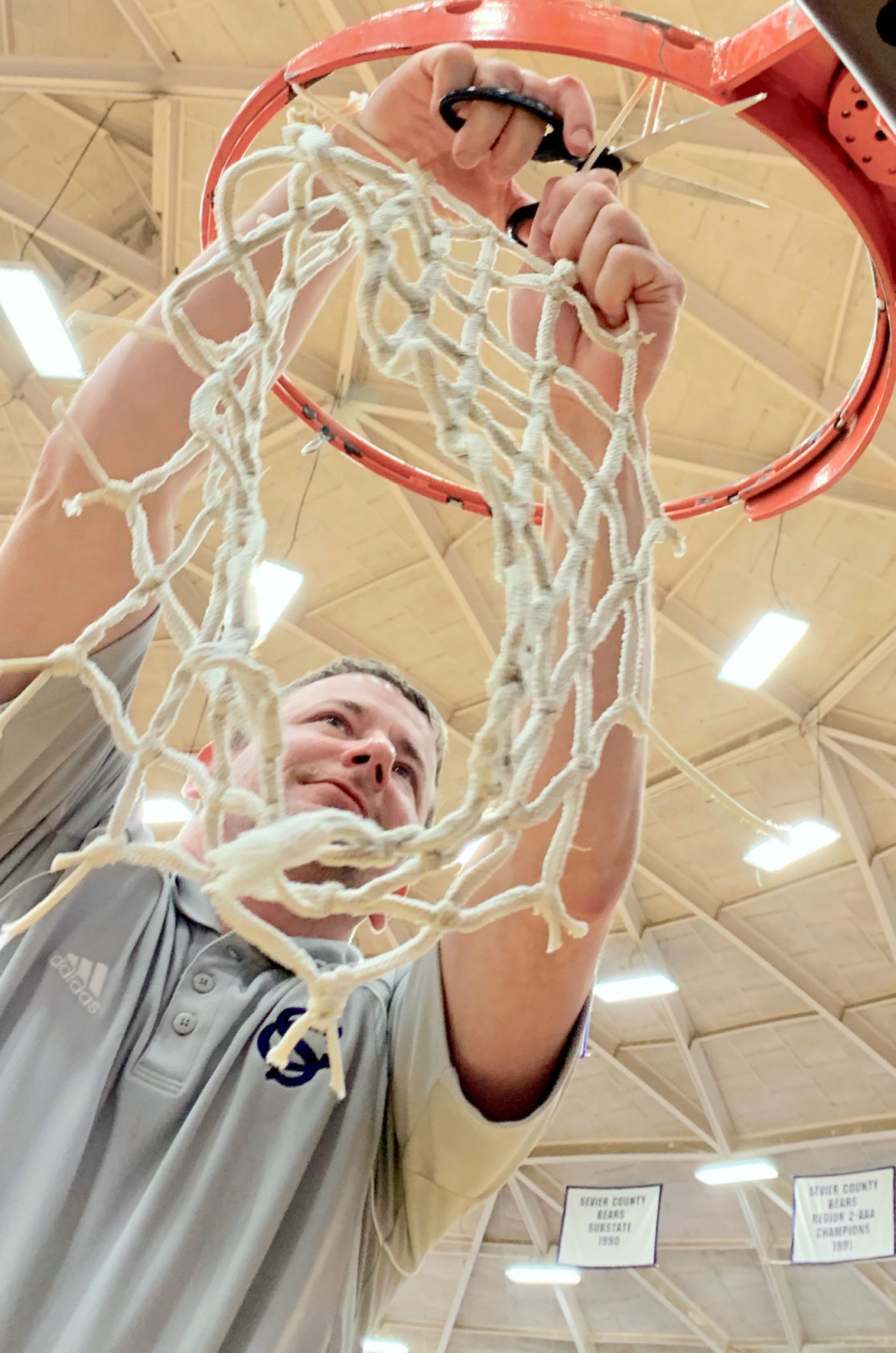 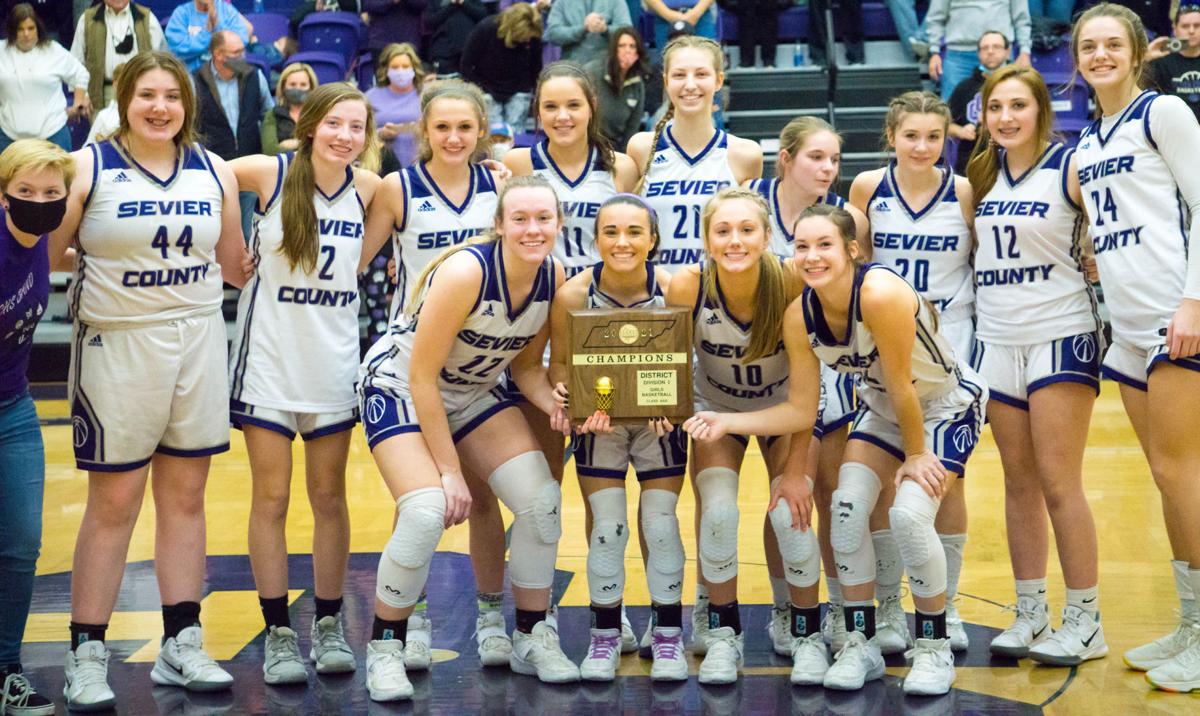 {span}Sevier County’s Mackenna Loveday is fouled by Lady Patriots player Makenzie Alvey on a fourth-quarter drive to the basket Saturday night. Loveday was 3-for-4 from the stripe in the final period of play.{/span}

SEVIERVILLE — For the first time in nearly 20 years, the Bearettes are district regular season and tournament champions.

Amazingly, the team’s championship victory came with the Bearettes making only nine field goals from the floor in the entire game.

Sevier County instead won the game at the charity stripe, knocking down 25-of-32 free throws in the foul-plagued contest, including 15-of-18 over the final eight minutes.

“The second half we really put in the free throws,” Bearettes coach Jonathan Shultz said. “I’m proud of the girls for going to the line and knocking them down. (Jefferson County is) a really good defensive team, especially in the half-court. We weren’t getting transition buckets, so I told them it was going to be a grind,” Shultz said.

“I said, ‘With their aggressive defense, just keep attacking.’ And once we got into the bonus, I felt good about it. Because I felt like we would have opportunities to shoot free throws, and I love every possession that ends in free throws.”

Sevier County’s Amanda Clabo was clutch throughout the game, leading the Bearettes in scoring without making a single field goal.

The senior was 13-of-16 from the foul line and made 7-of-8 down the stretch to seal the victory. At one pivotal point in the fourth, Clabo scored six-straight points — all from the line — to increase the Bearettes’ lead from 34-32 to 40-32 in just over 30 seconds.

There were nine lead changes or ties in the game’s first half as the district’s two best teams started their battle for the tournament title.

The Bearettes pulled away for good in the third quarter, never trailing after Kinley Loveday bombed in a 3-pointer with just under five minutes to go.

Jefferson County did narrow the lead to just two points later in the third and again in the fourth, behind strong play from Kali McMahan and Alexa Gramann, but the Bearettes high-pressure success at the free-throw line ultimately proved too much for the Lady Patriots.

Clabo, Mackenna Loveday, Natali Shultz, Kinley Loveday and Shilah Whaley combined for 15-of-18 from the line down the stretch when it mattered most.

After Clabo’s 13, Mackenna Loveday and Shultz were next on the Sevier County scoring list with 6 points each. Huskey, Kinley Loveday and Whaley notched 5 points apiece. Shelby Smith had a first-quarter 3-pointer, and Hailey Williams and Emma Fowler chipped in two points apiece.

While Huskey’s point totals weren’t eye-popping, Shultz said the right player was chosen for MVP of the tournament.

“She means so much, but she doesn’t show up in the scorebook,” the coach said. “You have to really look at all the stats and see our team to see how big of a contributor she is. So I was proud of her for getting the MVP.”

Huskey herself was a little shocked when the award was announced.

“I was very surprised because I was thinking it would probably either go to Amanda or Mackenna because they always lead our team and are really good at basketball,” Huskey said. “So I was really surprised.”

In spite of the Bearettes’ low field goal total, Jefferson County had an even greater struggle from the field, making only eight baskets in the game.

“I thought defensively we played really well,” Shultz said. “That’s been our thing the last several years. We’ve never been an explosive team consistently, but on the defensive end we’ve been pretty strong, and that’s just a tribute to the girls and their effort. Defense is all about effort, and they just played their butts off.”

Huskey said while poor shooting often affects the Bearettes’ defensive effort, she and her fellow seniors stressed the importance of keeping on top of the Lady Patriots defensively even as the offense flailed.

“(Poor shooting) usually affects our defense, but tonight we were just like, ‘We can’t let it do that,’ ” she said. “We just pushed through it — ‘Stay quick, stay in the game, don’t get down. Go play hard on defense. As long as we can stop them on defense, we’ve won,’ ” Huskey said.

The Bearettes will next play District 1-AAA’s no. 4 seed, Volunteer, at home on Friday in the first round of the Region 1 tournament. Volunteer brings a 12-15 record into the contest, They lost to Dobyns-Bennett 58-25 Friday in their district’s consolation game.