Sign Up
Log In
Purchase a Subscription
You have permission to edit this article.
Edit
Home
News
Obituaries
Opinion
Sports
Entertainment
Classifieds
Eedition
Other Publications
Share This
1 of 2 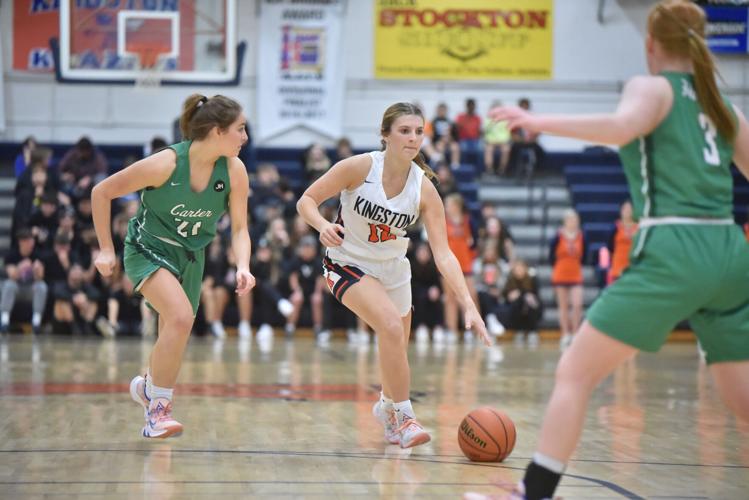 Madison McElveen dribbles down the court during the Lady Jackets’ victory over Carter High. 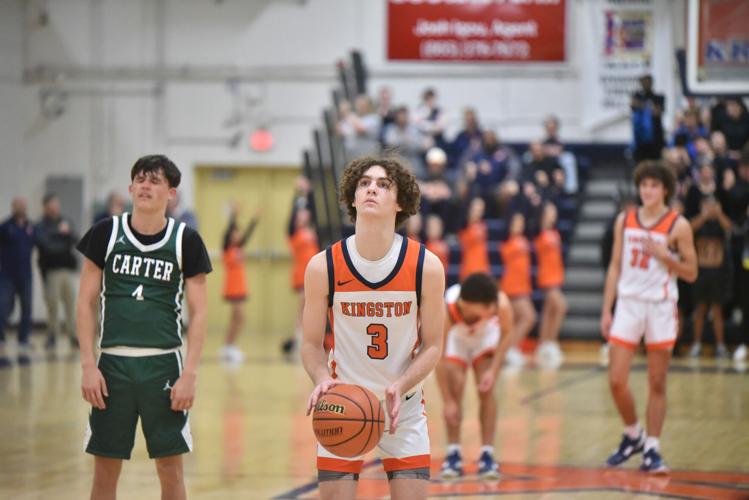 Corey Raymer goes to the free-throw line for Kingston.

Madison McElveen dribbles down the court during the Lady Jackets’ victory over Carter High.

Corey Raymer goes to the free-throw line for Kingston.

The Roane County High’s Lady Jackets played their first game Thursday night, Nov. 17, against Carter High and they delivered an exciting performance. Braxton Fritz had a high scoring game, shooting for 16 of their 66 points, the most out of her teammates. She had two threes in the stat sheet as well. She was a key part in their 21 point win over Carter.

The game started with the Jackets scoring first off of a Fritz basket. The Jackets go on to score 14 unanswered points before Carter finally scores on a 3 pointer. Turnovers were a huge problem for Carter early on. They had more turnovers than points in the first couple minutes of the game. This was due to a stifling Lady Jackets defensive effort, holding Carter to a miniscule 5 points, leaving Kingston up by 14 points going into the second.

The second starts off again with a Fritz 3 pointer, increasing the Jackets lead quickly. She would go on to hit another 3 directly after Kinsley Diggs hit a clean floater to continue and pile on the lead before halftime. Carter had some nice scoring runs in this quarter, however, and cut into the Jackets lead as it progressed. But, with the clock winding down on the first half, the Jackets are able to surge ahead and end the first half with an 18 point lead.

Kingston scores first once again as the 3rd opens up, this time coming from Macey Neal, who also had a nice night scoring-wise, racking up a total of 13 for the game. Then, with the score at 40-21, Fritz hits another 3 pointer to give the Jackets a 43-21 lead early in the 3rd. The jackets showed off their amazing ball movement, setting up multiple assists in this quarter, as well as racking up even more steals. They ended this quarter with a lead of 19 points, 49-30.

The Jackets did not stop here, though. They kept pounding forward. Throughout the game they showed quick hands and shutdown defense to get takeaways and fastbreak scores. Fritz was once again the highest scorer in this quarter, and she also totaled a couple of steals onto her data line. Ella Lemons also came up with some key takeaway, as well as great passing leading to scores from her position at the top of the key. She finished the game with 11 points. Other notable scorers for the game include Maris Neal with 3 points, Diggs with 6, Addison Roberts with 4, Sailor Presley with 3, Madison McElveen with 6, and Reese Newman with 4. The combined scoring and defensive efforts is what settled the win for the Jackets Thursday night, as they put up 66 points against Carter High, as well as held the opponents to only 36. Kingston totaled 18 points from beyond the arc, and also had 14 off of free throws. They shot 14/23 from the line, giving them a 60.87% free throw percentage on the night. The ladies finished off the night with a sizable win as the scoreboard read as follows: Kingston 66, Carter 36.

The Roane County High boys basketball team took on Carter on Thursday night with a determination familiar to season opening games. It was a nerve wrecking game that left both sides on their feet, but the Jackets sat the other team down as they emerged victorious by a slim margin. Their top scorer for the night was Ethan Clifton, a Junior forward for the Jackets. He had 16 points on the night and did a great job defending the basket on the blocks.

The 1st quarter wasn’t a standout one for the Jackets, as they scored only 19 points, 7 less than Carter. However, they were able to establish the 3-ball in their gameplan, as they made 4 in just that quarter, two of which coming from big man Aaron Layne. Layne had 7 for the game, all of them coming from the 1st quarter. For Carter, 22/26 of their 1st quarter points came from just two players, both utilizing their ability to draw contact and make the basket for extra points.

In the 2nd quarter, the Jackets cut back into the Carter lead, however still trailed behind. Parker Jones showcased his step back three to give the Jackets an early boost of momentum as the 2nd began, however this would not deter Carter, as they scored on their next possession. It was a tight quarter, as both teams traded baskets. However, as the 1st half counted down, Clifton scored 6 points, followed by Malachi Brown scoring on a layup. The score going into halftime rested at 39-36, Carter with a slight lead.

In the 3rd quarter, Kingston was still trailing, trying to fight their way ahead. The half started with an amazing pass from Corey Raymer to Clifton for a clean right handed layup. Then, directly after this play, Kingston got a scoop and score steal to give the Jackets the lead. From this point on, it would be lead change after lead change. Both teams playing with extreme aggression and efficiency, they would run up the score on one another. The 3rd quarter ends with only a 6 point deficit for the jackets, 59-53.

The 4th quarter held the most excitement. It started with Kingston’s Will Mioduski hitting a 3 pointer to cut down Carter’s lead. This was his second 3 of the game. From here, he runs down and gets a block under the goal, preventing the Carter score and giving Kingston an opportunity to score once more. However, they can’t capitalize and Carter scores. Off the in-bound pass, though, Jayden Dryman passes to Mioduski again who hits from deep. The score now rests at 63-59, Carter up still. Aaron Layne was a key part in the Jackets’ regrouping and takeover of the 4th quarter as he crashed the boards with passion and racked up rebounds. Malachi Brown’s court vision reveals to him an opportunity deep in the 4th quarter, and he takes it. Brown swipes the ball away from an unsuspecting Carter guard and runs down the court to score and tie the game at 65. Then, Brown goes back down the court to shoot a 3 pointer that gives Kingston the lead late in the game. From here, a Dryman 3-pointer would be the cap on the game, as Carter fought to climb back up but ultimately fell to the Jackets by one point.

The Jackets now are 1-0 on the season and look to add more to their win column coming off of a 71-70 victory.