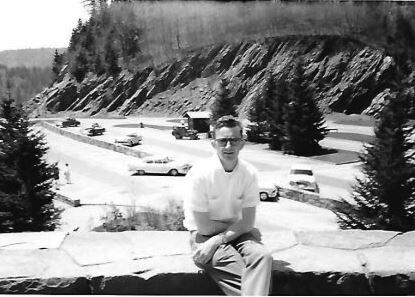 Dan, on leave from the Navy, poses at the Rockefeller Memorial at Newfound Gap in the Smokies in 1960. 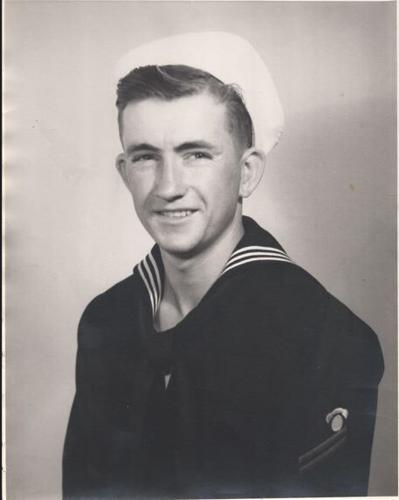 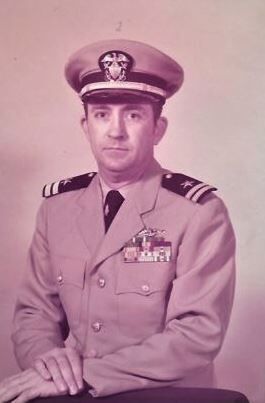 Dan retired as Lieutenant in 1974 after 21 years of active service.

Dan, on leave from the Navy, poses at the Rockefeller Memorial at Newfound Gap in the Smokies in 1960.

Dan retired as Lieutenant in 1974 after 21 years of active service.

When Dan Harris posed for a picture at Newfound Gap in 1960, he couldn’t have imagined that his future wife was living nearby in Pigeon Forge. Dan was in the Navy and visiting the Smokies while on leave. I, that future wife, had yet to celebrate my seventh birthday.

Harold Dan Harris was an Alabama farm boy. Following his birthday in 1953 — the year I was born in Sevierville to Leonard and Edna England Huskey — Dan hitchhiked 40 miles to join the Air Force. That recruiter was a no-show, but a smooth-talking Navy recruiter’s pitch fascinated him. He took the exam and soon received a vaguely-worded postcard instructing him to appear on April 9. He set out early, hitching rides once again. Imagine his shock when the recruiter asked, “Are you ready to go in the Navy today? Bus leaves at 10.”

He was totally unprepared, but after considering his limited options, he chose the Navy over mules and cotton fields. He had only $2.73 to his name. At a nearby drugstore he doled out some of that precious money for toiletries and — as there was no phone at home — a two-cent postcard to tell his parents he had joined the Navy. He grew up that spring morning on Broad Street in Gadsden, Alabama. At 10 a.m. he tucked his paper sack of worldly possessions under his arm and boarded the bus for Montgomery. The next day he and other recruits traveled by bus to Birmingham for official induction. After a long train ride he arrived in San Diego for recruit training on April 13, 1953.

In July Dan attended Interior Communications School and in November was assigned to the aircraft carrier, USS Essex. Two cruises on the Essex took him to Wake and Midway Islands, Japan, Korea, Taiwan, Hong Kong and the Philippines. In June 1955 he reported aboard the cargo ship, USS Jupiter, operating out of Yokosuka, Japan, and by October 1956 he was aboard another carrier, USS Hancock homeported in San Diego.

He completed the second phase of Interior Communications School in Great Lakes, Illinois in February 1959 followed by a stint with Mine Division One Eleven in Sasebo, Japan where he maintained minesweeper electrical and gyrocompass equipment. It was during this decade he left the Navy, joined the Reserves, and attended the University of Alabama. It took five months for him to realize his mistake; he dropped out and reenlisted.

In February 1960 he reported to New London, Connecticut for submarine school and submarine electricity school. His commanding officer wrote, “I note with pleasure your qualification in submarines in three months, much less than the normal time allowed. In addition to indicating an outstanding personal performance, you have set a fine example for all new submariners to follow which greatly assists the Command qualification process.”

Later that year he reported aboard the submarine USS Chopper where he was responsible for Interior Communications crew and equipment with the collateral duty of assisting submariners training. The Chopper visited Cuba, Canada and England. On May 31, 1961 he reported to an intermediate station, the submarine USS Barracuda. His next duty station was the Naval Communication Station in Sidi Yahia, Morocco where he supervised Interior Communications crew and special projects. At one point, he completely designed a main frame installation including drawing up plans and getting construction underway, accomplishing what was deemed “beyond ship’s force ability.”

In September 1963 he began Guided Missile School in Dam Neck, Virginia. By November 1964 Dan was aboard a ballistic missile submarine, USS Simon Bolivar. He was one of two leading missile technicians in the division. He spent considerable time in Charleston at the Naval Weapons Station Polaris Missile Facility as a senior missile technician.

During the Viet Nam war, Dan served on the USS Ault. The destroyer spent 45 days on the coast of South Viet Nam engaged in intensive combat operations, plus 19 days on Sea Dragon Operations off the coast of North Viet Nam providing offensive surface operations/coastal defense. In addition, Dan was the electronics officer responsible for eight LSTs (landing ship tanks), as part of Landing Ship Squadron Nine in Japan. In 1968 he was instrumental in the overhaul of the USS Whitfield County’s communications/electronics package.

In January 1970 Dan went aboard the cruiser, USS Oklahoma City, homeported in Yokosuka, Japan, as Electronics Maintenance Officer. His final assignment in August 1971 was at Command Operational Test and Evaluation Force in Norfolk, Virginia. As Materiel Suitability Analyst he performed test and evaluation on 20 new weapons and equipment. His work on the Deep Submergence Rescue Vehicle (DSRV) was a project with special complexities and importance. “His understanding and concern for the system is reflected by actions taken at higher levels to improve the DSRV,” said his Commanding Officer. He also earned specific praise in the case of the MK-105, airborne mine countermeasure device and associated equipment.

While poring over Dan’s military records recently I read evaluations describing him as magnificently devoted, never countenancing compromise with mediocrity, unrelenting in the pursuit of perfection, a fine example of leadership, an excellent shipmate, and an exemplary officer and gentleman. These glowing evaluations merely increased my respect and admiration for him and for the thousands of veterans who served above him, beside him, and under his direct leadership. When Dan and I found out through Sevier County native Hal Wilson that his brother Lowell had served on the USS Oklahoma with Dan, Hal immediately called up his brother. Lowell said, “I don’t remember him, but I’m sure I saluted him.”

In 1974, after 21 years of active service, Dan retired to Cleveland, Tennessee He subsequently enrolled at Cleveland State Community College where I was taking evening classes while working. Our paths crossed in 1975 when we showed up for a class earlier than other students. At first classroom competitors, then friends, and six years after that somewhat awkward first meeting we were married. I marveled that a retired Navy Lieutenant who had traveled the globe, hobnobbed with Admirals, and roamed the corridors of the Pentagon would be smitten by an unsophisticated young woman from the backwoods of Sevier County.

In 2003 we moved to Sevier County, which for me was “coming home.” We relocated to Jonesborough in 2013. After almost 41 years of marriage, my beloved husband, this extraordinary veteran, died unexpectedly at our home on April 3, 2022. His remains are inurned at the East Tennessee State Veterans Cemetery in Knox County.

The Lieutenant Harold Dan Harris Memorial Scholarship has been endowed at Cleveland State Community College. To make a tax deductible contribution to the scholarship, contact Lee McChesney at 423-473-2489, or by mail to Cleveland State Foundation, P.O. Box 3570, Cleveland, TN 37320

Jo Harris, a freelance writer, is a resident of Jonesborough, Tennessee and a native of Sevier County.