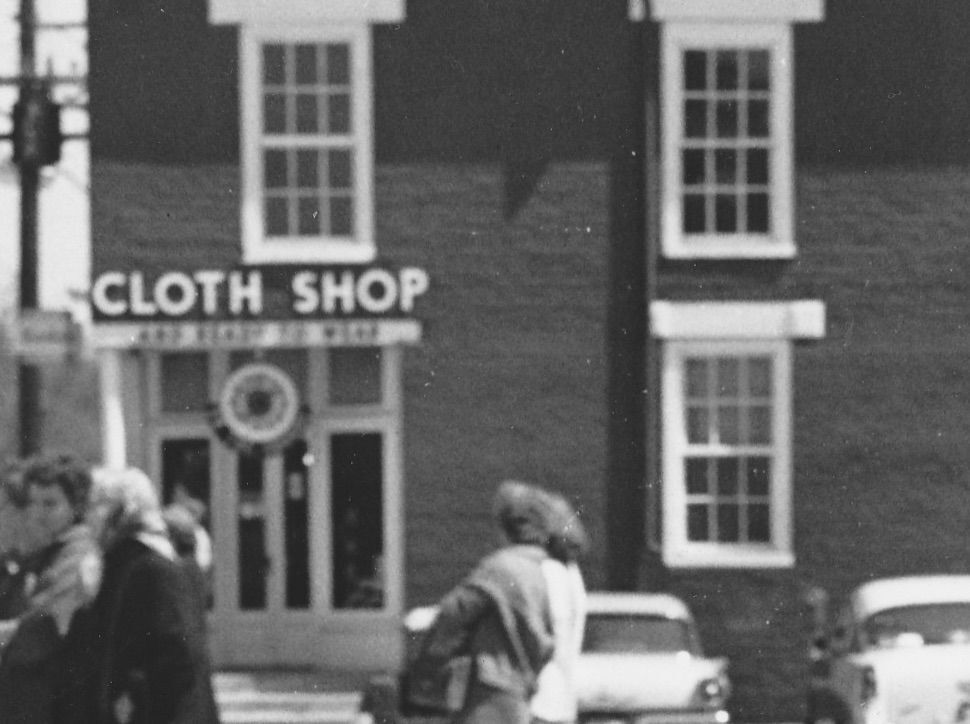 Left: A picture of The Cloth Shop that was taken in the early 1960s is shown and the building known as the Emert Brick was built before the Civil War. Right: On a buying trip to Atlanta for The Cloth Shop, Ina Roberts, left, is pictured with an unidentified gentleman. 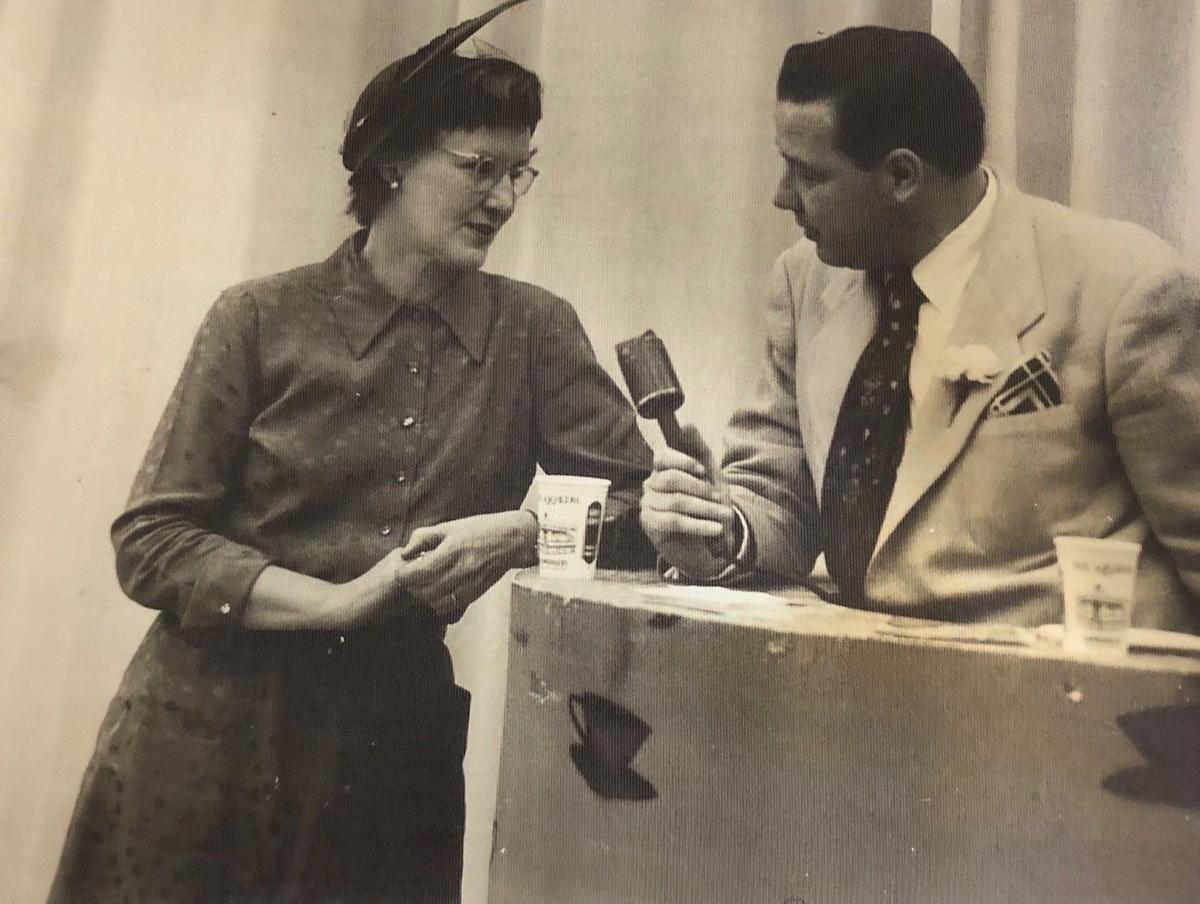 On a buying trip to Atlanta for The Cloth Shop, Ina Roberts, left, is pictured with an unidentified gentleman. 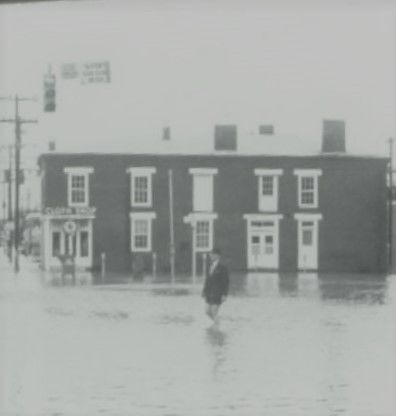 This photograph of The Cloth Shop was taken during a flood in the 1960s.

Left: A picture of The Cloth Shop that was taken in the early 1960s is shown and the building known as the Emert Brick was built before the Civil War. Right: On a buying trip to Atlanta for The Cloth Shop, Ina Roberts, left, is pictured with an unidentified gentleman.

On a buying trip to Atlanta for The Cloth Shop, Ina Roberts, left, is pictured with an unidentified gentleman.

This photograph of The Cloth Shop was taken during a flood in the 1960s.

Ina Roberts’ position as executive secretary of the American Red Cross was downsized by 1948 due to the end of World Ward ll. Her sister, Jean, had recently moved back to Sevierville after living a year in Gatlin- burg. Jean’s only daughter Mary Alice Dennis was working for the summer at the New Gatlinburg Inn before leaving for Athens, Tennessee to attend Tennessee Wesleyan College.

Ina owned the building that is now known as the Ogle Building at the southeast corner of Bruce Street and Court Avenue in Sevierville. This building was built in 1920 and was first occupied by Purity Drug Company and was followed by the First National Bank of Sevierville. The bank failed during the Great Depression and was sold at public auction to Ina and her first husband Robert Seaton, Dr. C.P. Wilson, Sr. and Dr. Otha H. Yarberry. The building was then used as offices for the two doctors as well as a law office for Seaton.

Dr. Yarberry and Dr. Wilson eventually built their own hospitals and Robert Seaton passed away. Therefore, the street level area of this building was vacant when the sisters decided to open a business. Ina,50, and Jean 44 would sell fabrics, patterns, and other sewing supplies. They chose “The Cloth Shop” for the name of their business. Ina would be the bookkeeper and handle the business side of the operation while Jean, a creative and competent seamstress, would deal with the customers in their interest in buying fabric and sewing for their families.

Their first venture outside Sevierville was to drive to Deaver Dry Goods Wholesale House in Knoxville to purchase merchandise. Fortunately, the Deaver personnel took them under their wings and shared valuable information the two fledgling businesswomen needed.

The staff at Deaver’s began by educating the sisters as to what was available from the wholesale sector as well as insights on price coding, and instilled in them the adage, “You can’t do business with an empty wagon.” During this time, they began to branch out from a “cloth only” store to offer selected dry goods and a few other types of merchandise.

After firmly establishing themselves with the wholesaler, the sisters next endeavor was an adventure to attend the large merchandise market in Atlanta, Georgia, which opened a whole new world of retail for them. They began making the trip more than once a year and always brought back exciting tales of events that had happened while there, and new contacts for them to use in securing lines of clothing and dry goods to sell in their store.

The store was still called the Cloth Shop; however, it had not taken them long to branch out into different types of merchandise. After a couple of years, the original space was too small for these industrious women to continue to grow their business. Furthermore, Ina sold her interest in the building in which they had been operating.

The new location of the Cloth Shop was on the northeast corner of the public square. The century-old, drafty building was known known as the John B. Emert Brick. It was constructed shortly after the fire of 1856 and at first John Emert operated a general merchandise store on the ground level. He and his wife had living quarters on the second floor.

Later Cameron, Ingle and Company remodeled the building and operated an ice cream parlor and restaurant there. Next W.H. Teague purchased the building. Teague later sold it to a group of business partners who included Earnest Conner and Sanders Atchley.

There was an upstairs space reached by a long, narrow staircase that was more space than was needed for The Cloth Shop. But another reason the ladies did not use the space was because there were several interesting items the funeral home left behind that included embalming fluid bottles and other items relevant to embalming.

The street level had an entrance off the square and main street, and a back entrance that opened to the area that was the location of Palace Barber Shop and the Central Hotel.

Left behind when Ina and Jean leased the building were several antique showcases that they put to good use. There was a back room that could be accessed from the back entrance that was used by Ina as her office, and in another area, Jean had her sewing machine.

Because of its location on the main route through town that led to the Smokies, The Cloth Shop seemed to be a magnet for people needing directions, to locate a person, or someone needed personal assistance. The sisters were always ready to help. With such an influx of people in and out of the store, very little happened in Sevierville that was not discussed in the store. Because so many travelers came in, Ina and Jean added merchandise that would be appropriate for souvenirs.

The Cloth Shop always had two employees other than the two owners. Some of these were family, and the other ladies became like family while working there. Among those who worked there over a span of two decades included their nieces, Glenda Hardin Atchley and Olive Hardin Kear; their sister Thelma Wear McCall; and friends Cleo Byrd, Opal Fain, and Natalie Clinton.

When family and friends came to town, they usually dropped by the Cloth Shop to catch up on news. An example of how family members felt about the Cloth Shop: Vivian Thomas, wife of their nephew Kent Thomas, was injured in a serious wreck. When the paramedics loaded into the ambulance, she said to them, “Just take me to the Cloth Shop, they will know what to do and take care of me.”

When the sisters reached retirement age, they packed up their personal items, sold the stock, and closed the doors leaving a generation of memories of The Cloth Shop. Shortly after the Cloth Shop closed, the old building was demolished along with the next-door hotel to make room for a new Sevier County Bank building.