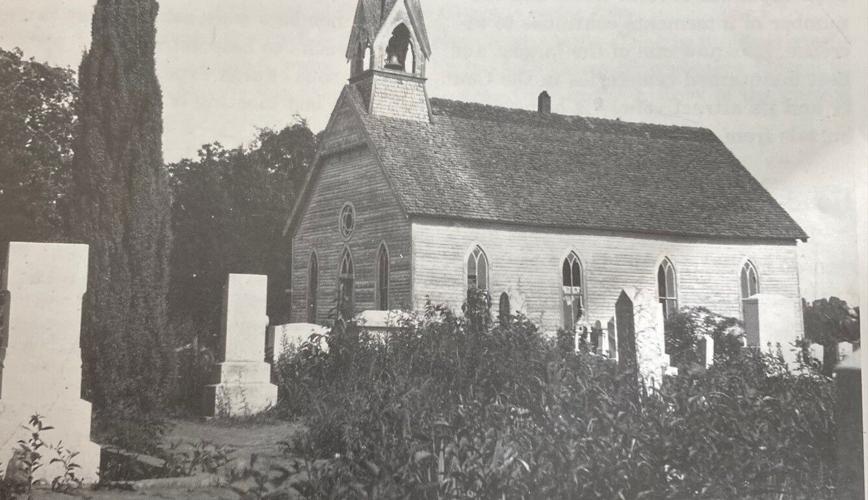 Surrounded by the cemetery, Shiloh Methodist Episcopal Church was established in 1803. 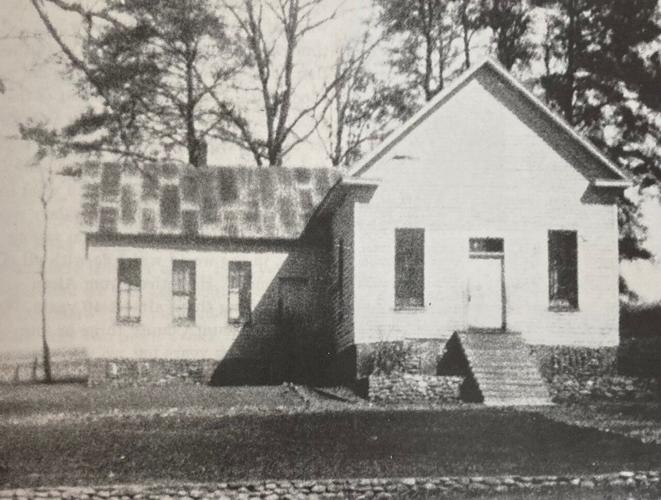 Pine Grove School opened in 1886 and served as the public elementary school for several generations. 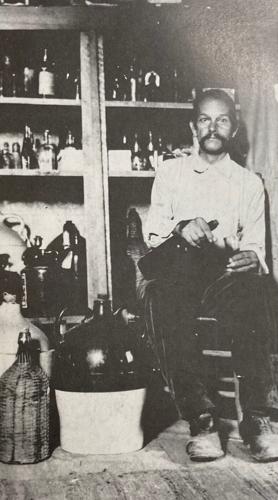 Pinkney “Pink’ Rauhuff was a popular wine maker and square dance caller at Henderson Springs Resort. He shared his wine with friends and churches for use in communion services.

Surrounded by the cemetery, Shiloh Methodist Episcopal Church was established in 1803.

Pine Grove School opened in 1886 and served as the public elementary school for several generations.

Pinkney “Pink’ Rauhuff was a popular wine maker and square dance caller at Henderson Springs Resort. He shared his wine with friends and churches for use in communion services.

In the early 1800s, the community that became known as Pine Grove began to take form. Families migrating from Virginia, Pennsylvania, and other eastern states looking for available land on which to settle were attracted to the fertile river valley just north of Fort Wear. In the 1780s, Col Samuel Wear, a Revolutionary War soldier from Virginia, built a fort at the confluence of the West Prong of the Little Pigeon River and Walden’s Creek and laid claim to approximately 1000 acres.

In 1808, the State of Tennessee began issuing land grants to settlers along the river. Among the first to arrive was John Mullendore who received a land grant for 450 acres and Flayl Nichols for 331 acres. Others followed with surnames that included Henderson, Montgomery, Rambo, Runyan, Seaton, Andes, Hatcher, Hounshell Sharp, Seaton, and several more.

Mitchell Porter was another Revolutionary War veteran who migrated to the area from Pennsylvania. Legendary Methodist Bishop Francis Asbury recorded in his famous journals of stopping at the home of Mitchell Porter in 1802, 1808, and 1810. Following the first visit, a church was established, and a log structure was erected in 1803 to use for worship and a community school. And there was enough land for burying grounds surrounding the church. When Bishop Asbury returned in 1808, he delivered a sermon form the pulpit.

Some of the families chose to worship in a Baptist church but had to travel four miles on unimproved roads to the Forks-of-the-River Baptist Church in Sevierville. Finally, on May 19,1857 a Baptist church was established in the community which was named United Baptist Church of Christ at Henderson Springs. The church, now known as Henderson’s Chapel Baptist Church, began with 33 members. The congregation met in a small log building on the grounds of Henderson Springs Resort, until a wood frame structure was built around 1890 on land donated by William and Rebecca Henderson near Shiloh Cemetery.

It is ironic that the Baptist congregation held services on the grounds of Henderson Springs Resort because dancing was a popular pastime at the hotel, and Baptist doctrine strictly prohibited any form of dancing. Still, there were those who could not resist the temptation and suffered the indignity of being expelled from the church.

Elijah Henderson, son of William H. and Mary Catherine Cannon Henderson, and his family developed a popular resort around a mineral spring only 400 feet north of this marker. The mineral water was promoted as an “effective and invigorating tonic.” People from miles around brought buckets and filled them with this “special” water that poured from an old gun barrel spout. A chemist declared that the spring water contained eleven minerals which included sulphates, carbonates, chlorides, and many other healthy properties.

A two-story wooden hotel was constructed in 1878 across from the spring and consisted of ten rooms, a dining room for eighty, and a spacious kitchen with two huge wood cook stoves. A platform spanned the small branch and led to the spring and concrete spring house where icy cold water kept food fresh. A second platform farther north led to a small concession stand and was an open-air picnic area lined with benches.

In 1897 a new three-story hotel with 32 rooms, wide halls, and wide stairways was built just north of the old hotel. To the south on a pine-thatched knoll sat an open-air square dance pavilion. Sam Henderson became owner of the resort after his father Elijah died in 1898.

To replace the school that had been quartered in Shiloh Methodist Church, a public school was built in 1886 on land donated by Robert Montgomery and J.W. Rogers. After the school was opened, the community became known as Pine Grove, taking its name from a grove of pines where the school was located.

The heart of the community centered around the churches and school. But businesses such as Mitchel Nichols’ Store, Joe Whaley’s Store, Sam Henderson’s grist mill, and Simeon Davenport’s furniture shop served the needs of the residents.

Around 1894, three raids were made in the Pine Grove Community by the notorious White Caps. The first attack was on Ruth Massey who lived near the mouth of Sharp Hollow. Benjamin Farr, an African American who lived in the same vicinity was the second victim. In late November 1894, an elderly, well-respected farmer, Andrew Henderson, was severely beaten by the White Caps and robbed of his money. He never fully recovered from the incident.

These unprovoked raids on innocent people attributed to the conflict known as the Battle of Henderson Springs between the White Caps and the Blue Bills, a group of outraged men formed to defend law-abiding citizens against the White Caps. The conflict took place less than a mile from Henderson Springs Resort on a craggy cliff overhang the Little Pigeon River. Casualties included Bruce Lewallen, Elijah Helton, and Laban Latham.

Before the days of public swimming pools, the swimming hole located along what is now River Divide Road was a popular hangout for teenagers and young adults. A rope hanging from a tree was used to jump into the water. The location was also used by several churches for baptisms.

Carroll McMahan is the Sevierville Chamber of Commerce Historian and serves as the Sevier County Historian.