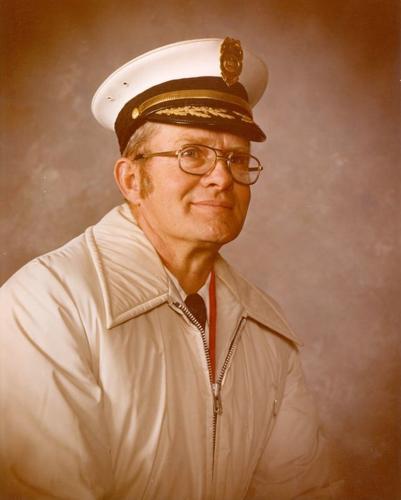 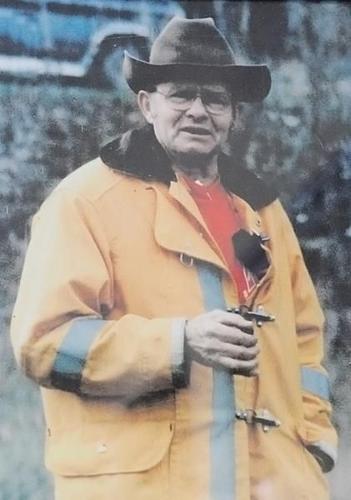 Most of Jim Atchley’s 40-year career as a fireman was volunteer. He started fighting fires before the first fire station was built. 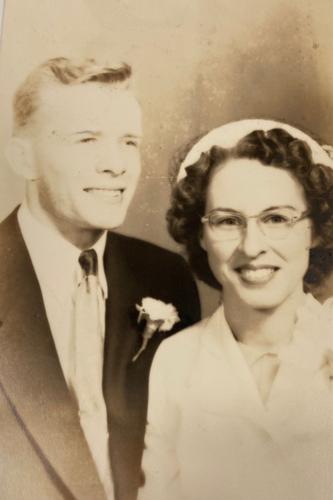 Billie Catlett and Jim Atchley on their wedding day in 1951.

Most of Jim Atchley’s 40-year career as a fireman was volunteer. He started fighting fires before the first fire station was built.

Billie Catlett and Jim Atchley on their wedding day in 1951.

James M. “Jim” Atchley and his twin brother Charles were born on Aug. 14, 1927. Their parents were Charles N. Atchley and Ida Nichols Atchley. The brothers had two younger sisters Sarah (Smith) and Betty (Bottjer). His father died in 1937 and the family lived in the household with their aunts, Gertrude, Bess, and Hattie Atchley.

Atchley graduated from Harrison-Chilhowee Baptist Academy in 1945 and entered the U.S. Army in 1946. After his discharge from the Army, he married Billie Marilyn Catlett on May 19, 1951.

After working for McNelly-Whaley Ford Dealership for a few years, Jim opened a service station in Sevierville across from the First Baptist Church on Park Road. He then moved Jim Atchley Exxon to East Main Street. Later, he opened another service station and car wash on Dolly Parton Parkway.

While operating his business, he frequently worked as a funeral director at Atchley Funeral Home, a business established in 1920 by his uncle James H. Atchley and his father. Billie worked alongside her husband at the service station as well as doing bookkeeping at Atchley Funeral Home and Hardin Jenkins Auto Parts.

Jim joined the all-volunteer fire department in 1954. At the time, there were 26 men on the squad. No matter how busy, he always found time to answer the call when the alarm sounded. Atchley was a big promoter of fire prevention, sometimes giving families money from his own pocket to buy smoke alarms for their homes.

In 1958, the fire department was facing a crisis. Three years earlier it acquired for $1 an old Army gas truck from the school board. Its overhaul provided an 800-gallon tank, but more likely than not the old truck would break down before it reached a fire outside of town. Firemen called the junkpile the “Old Monstrosity.”

Atchley was at the forefront of the volunteers pleading with the local radio station for help. Station manager Skip Trotter turned WSEV over to the firemen for one full day to solicit funds from the public.

Atchley was named chief in 1965 when Thurman Ownby resigned. During his tenure, several memorable fires occurred in the county. In 1964 a fire difficult to contain broke out at Sevier Farmers Co-Op. The firemen pumped water from the nearby Little Pigeon River, but because fertilizer gives off ammonium nitrate, which can wipe out large areas in a single explosion, it was a long, hard-fought battle.

The old Sevier County High School on High Street was destroyed by fire on March 11, 1976. Although the rickety, old building had been vacant for seven years, the loss was particularly hard for the school’s alumni who attached great sentimental value to the place.

Undoubtedly, the most dramatic fire since the great fire of 1856 was the Temple Mills blaze on Oct. 20, 1980. The gigantic blaze was the one the department had drilled for but hoped would never happen. A total of 105 men with 12 trucks fought the flames. Seymour, Pigeon Forge, Gatlinburg, Northview and Walden’s Creek sent men and equipment. The first call came in at 8:10 p.m.; by 10:10 p.m., the fire was under control. Constantly spraying water on its roof, this time the diligent firemen managed to save the historic courthouse.

After the fire, Mary Joyce Temple Hughes wrote a poem titled ‘The Night the Rivers turned Red,” paying tribute to Atchley and the brave firemen who fought the blaze. A part of the poem reads:

“On this night everyone was a hero! Jim Atchley was in command of 105 “Brave Men” laboring to save lives and homes…. our town. Scared men, young men, alert men some we knew…many we did not know. Our thanks were blazed into their minds as we stood by watching their courage.

That night they saved the town.

When the rivers that forks turned red.

Yes! The river turned red just where it forked!”

Working in the fire department, Atchley helped several other local fire departments get started. He was also involved in getting Sevier County’s E-911 dispatch center.

Under Atchley’s leadership the standards were high, and the discipline was rigid.

With a stellar reputation, the volunteers were irritated over a charge that firetrucks were dispatched to “break up a Cas Walker rally,” an anti-sales tax gathering organized by a controversial groceryman and TV personality who lived in another county. After evidence revealed someone administered a false alarm, Atchley quickly switched to an alternative plan after receiving two similar calls in rapid order.

For many years, the non-paid firemen led by Atchley raised money parking cars during the Sevier County Fair. The county loaned them the land at Sevier County High School for a week and they charged fifty cents per vehicle. This fund raising was a necessity to keep their trucks rolling all over the county.

As the years rolled on, city and county officials responded to the physical needs of their volunteers. If Jim Atchley requested a new tanker, a new ladder truck, the purchase order was quickly written. By the time Atchley retired in 1993, the Prince Street Fire station housed some of the finest pieces of fire equipment found anywhere.

Always interested in architecture, Atchley loved to construct miniature replicas of items of interest to him. He displayed a miniature wagon and windmill in the lobby of his service station. For the fire hall he made a model on the scale of one inch-thirty feet of the city of Sevierville.

Atchley was a member and life-time deacon of First Baptist Church, Sevierville. He coordinated the work of the parking lot greeters, making an incredible and hospitable impression on guests and members at the church. Along with fellow church member Rich Wallace, he visited shut-ins, new church members, those hospitalized, and people needing the gospel every Monday night for more than 20 years. On Valentine’s Day, he personally delivered a long stem rose to widows he knew in the community.

After 25 years of juggling his business and fireman duties, Atchley turned his successful Exxon station over to George McCarter and Jimmy Parton and assumed the first full-time fire chief position.

A plaque placed in the fire department’s headquarters to honor Atchley upon his retirement says, “ Not only has he been the chief, but he has been a father figure to all of us. He is highly regarded as a loving and caring man, both by the fire department and community.”