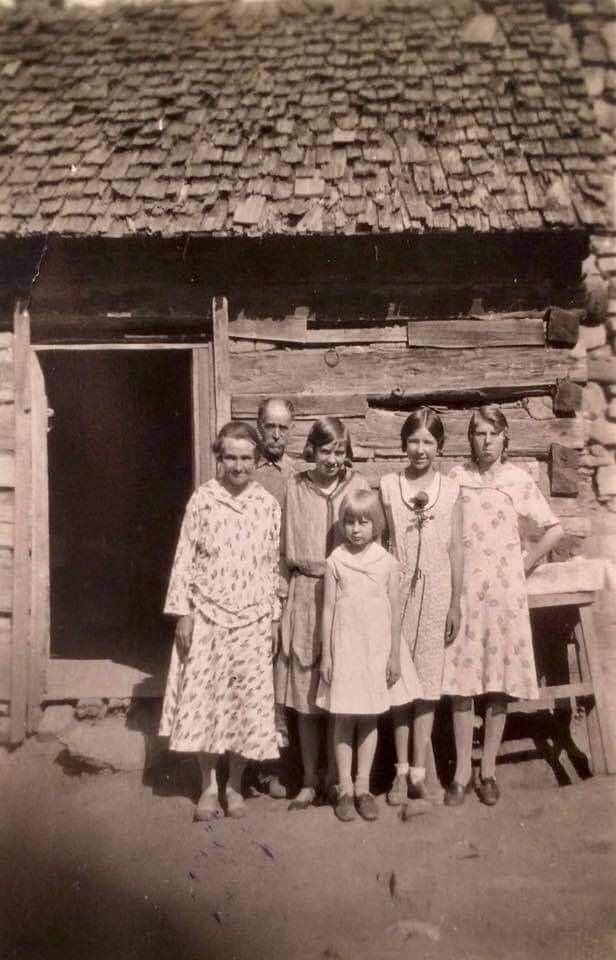 Joe Dockery and some of his family stand in front of the cabin where he was born in 1903. 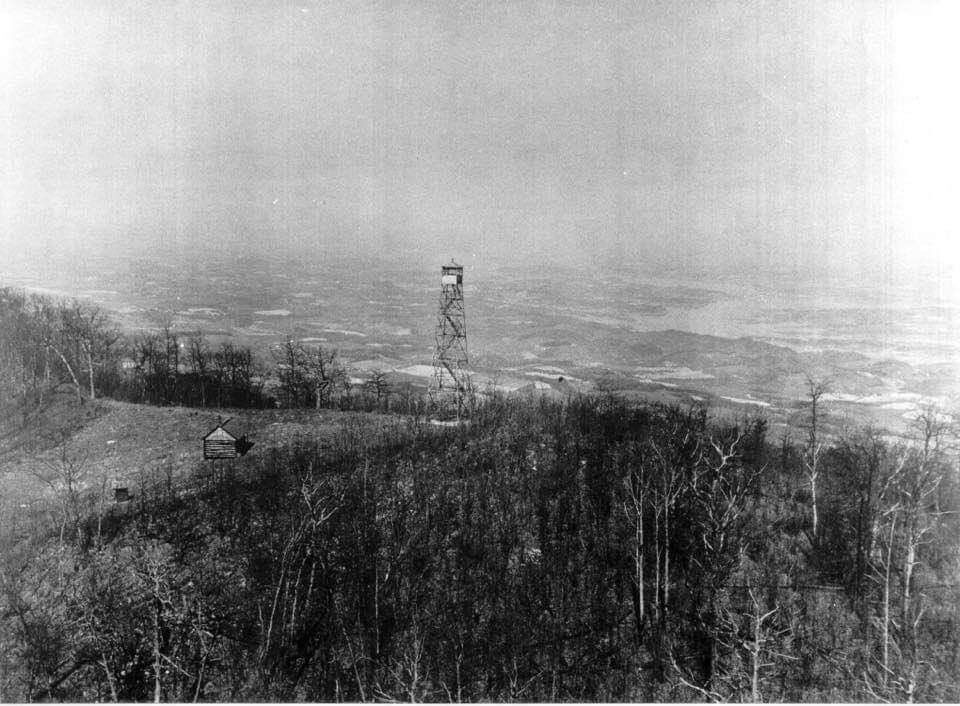 A Fire tower is pictured on English Mountain, not far from the Dockery homestead. Joe Dockery’s brother, John, managed it during fire season. 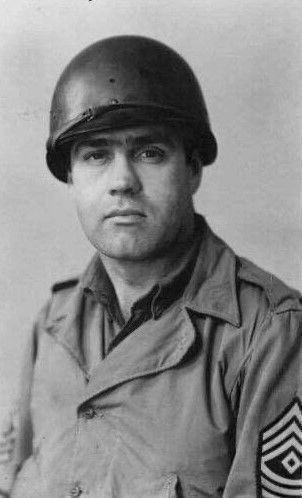 Joe Dockery and some of his family stand in front of the cabin where he was born in 1903.

A Fire tower is pictured on English Mountain, not far from the Dockery homestead. Joe Dockery’s brother, John, managed it during fire season.

Born in a log cabin on English Mountain on April 26, 1903, Joseph W. “Joe” Dockery was the oldest of four children of George Rufus Dockery and Louise Smith Dockery. All of his siblings’ given names began with the letter “J,” They included a brother, John, and sisters Jessie (Thomas) and Janie (Hurst).

After attending one-room rural schools in the Blowing Cave community, Dockery enrolled in Murphy College and to get there he had to walk the ten miles to Sevierville.

When he arrived at Murphy College, Dockery was wearing two different shoes because he could not afford a new pair that matched. However, he soon managed to find jobs to pay his board and cover the cost of tuition and books. Meanwhile, he found time to play football on varsity.

Years later Dockery would tell his sons that his coach required the team to jump on the side of the train at the Sevierville depot and hang on to the side until it reached the Cannon Hollow, a short distance from the Revilo station, where the players were mandated to jump off and run back to Sevierville, as part of their conditioning training.

Another often-told incident was about the time that almost the entire team contracted typhoid fever from drinking out of a contaminated well on campus. Only one teammate was spared because he had used a different water source than all of the others.

Andrew Jackson “A.J.” Bush, owner of Bush Brothers Company of Chestnut Hill had a couple of sons who attended Murphy College at the same time as Dockery. Perhaps because of the young man’s tenacity, Bush took an interest in him and gave Dockery four twenty-dollar gold pieces to use for college tuition. He graciously accepted Mr. Bush’s generous gesture, put his money in the First National Bank of Sevierville for safekeeping and enrolled at Lincoln Memorial University in Harrogate, Tennessee.

Unfortunately, once he had entered LMU and began enjoying life as a college student, the bank failed due to the Depression. All of his money was gone. Dockery decided he had no alternative but to leave school and try to find a job. As he was packing up to leave the dean came by and asked, “Joe, where are you going?” Fortunately, the dean offered him a job as the campus plumber, and Dockery was able to remain in college.

After graduating from LMU in 1932 he went with some friends to Chicago to look for work at the Chicago World’s Fair but was unable to find employment and returned home. He obtained a teaching certificate and began teaching in rural schools. Subsequently, he taught at Blowing Cave and Crockettsville as well as Sunset Gap Mission School before joining the Army in 1939.

Few of his fellow soldiers held a college degree, therefore Dockery soon made the rank of master sergeant. During World War ll, he was involved in the D-Day invasion at Normandy, France as well as the Battle of the Bulge, a German campaign launched through the densely forested Ardennes region in Belgium and Luxembourg towards the end of the war in Europe.

Before he entered the Army, Dockery attended a pie supper at Chestnut Hill School where he met one of the single teachers, Mary Lou Love of Jefferson County. Born Sept. 8, 1907, Mary Lou was one of nine children of Henry Marshall Love and Callie Collier Love, seven of which lived to adulthood.

After he returned from the war, they rekindled their romance and married on Christmas Day 1947 in a minimal ceremony at First Baptist Church of Jefferson City. The couple settled in Sevierville, and the following year Dockery, at age 45, decided to run for the office of Sevier County trustee.

Dockery had purchased his Willys Jeep after he returned from the Army where he had been captivated by them. Knocking on doors, campaigning at country stores and handing out cards throughout the county paid off on election day, Aug. 5, 1948, when he was elected to a two-year term. He was easily re-elected to another term in 1950 and in 1952.

He and Mary Lou had two sons, William “Bill” and Michael “Mike.” In 1953 they purchased a lot on Nichols Street in the Love Addition and hired J.F.&N. Construction Company, which was owned and operated by the well-known African American McMahan family, to build them a new house. They raised their sons there and lived the rest of their lives in the well-built stone house.

Living so close to the courthouse, Dockery often walked the short distance to work by crossing the swinging bridge connecting Love Addition to downtown Sevierville.

As a public office holder, Dockery took pride in the fact that voters had placed their trust in him. Consequently, he kept his impeccable ledger books in ink using a fountain pen. One year, his books were off one penny. He spent four and a half weeks meticulously pouring over the ledgers until he found the discrepancy.

For years the trustee’s office had split their deposits between the two banks in Sevierville, the Bank of Sevierville and Sevier County Bank, but when the First National Bank of Gatlinburg opened Dockery felt it only fair that the deposits be split three ways, a decision that was not politically popular with some people in the community.

Dockery had served eight two-years terms when, in 1962, the term of trustee was extended to four years. In 1961 Dockery suffered a heart attack at age 58 but recovered and ran for office again in 1962. Considered by some to have been in office too long, he was defeated in his bid for a four-year term by a much younger Blaine “K.O.” McMahan.

Again returning to education, Dockery taught at Benson and Wearwood, and served as principal at New Center before he retired. He continued to enjoy his avocation of beekeeping and taught a Sunday school class at Sevierville First United Methodist Church.

He was elected alderman and severed six years during the TVA Flood Control Project and was chairman of the Sevier County Electric System util shortly before his death. Dockery died on Dec. 1, 1988 at age 85. Mary Lou joined him on Oct. 6, 1991. She was 84. They are buried at Mount Horeb Cemetery in Jefferson County.