Sign Up
Log In
Purchase a Subscription
You are the owner of this article.
Edit Article Add New Article
You have permission to edit this article.
Edit
Home
News
Crime
Obituaries
Opinion
Faith
Lifestyles
Sports
Special Sections
Classifieds
Eedition
Other Publications
Share This
1 of 6 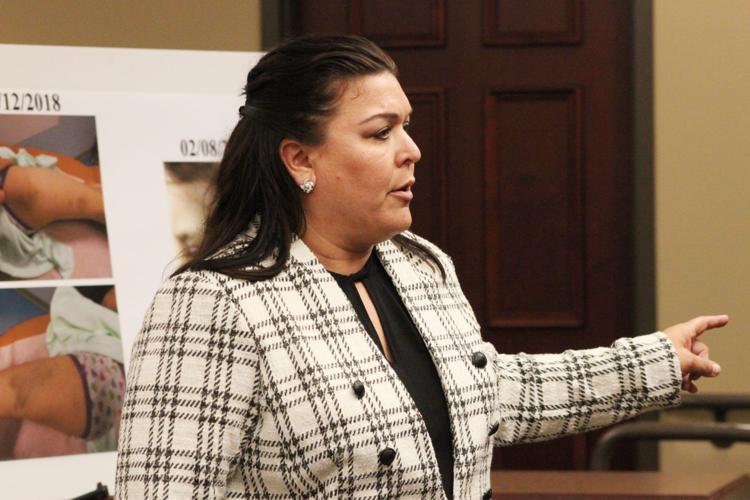 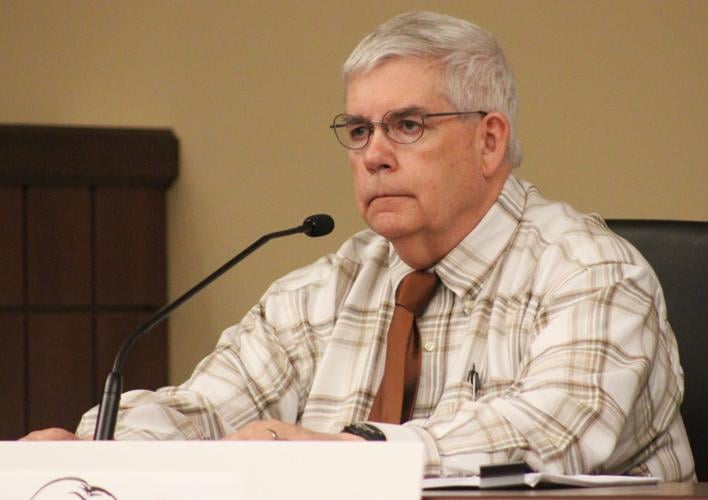 Jeff Mann testifies about his medical treatment of the child on Feb. 8, 2018. 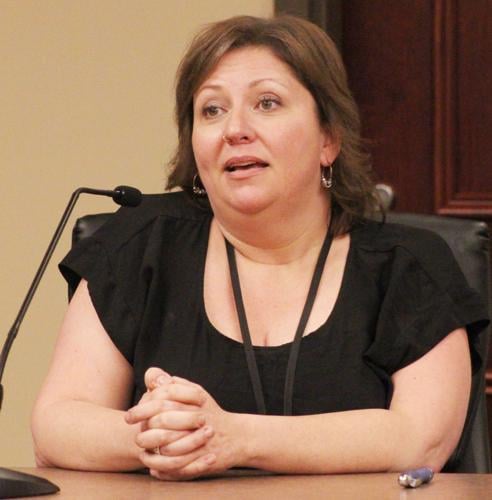 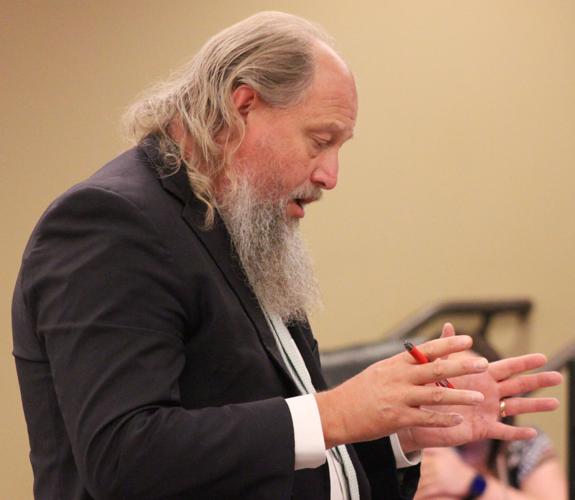 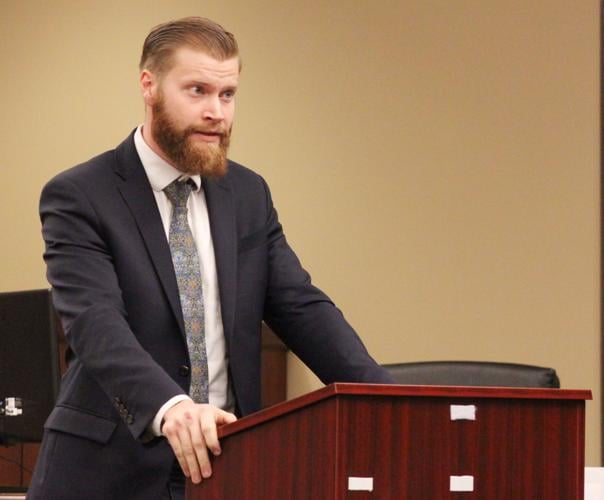 Defense attorney Brian Sableman speaks to the jury during his closing argument.

Jeff Mann testifies about his medical treatment of the child on Feb. 8, 2018.

Defense attorney Brian Sableman speaks to the jury during his closing argument.

Ashley Ledford and Brandon Stepp were both convicted of two counts of aggravated child abuse and neglect regarding a child under the age of 8 after a four-day trial last week. Following the jury’s decision, Judge Shayne Sexton revoked the pair’s bond, immediately returning them to the Campbell County Jail. A sentencing hearing will occur later this summer.

The third alleged that Ledford and Stepp, who are in a romantic relationship, inflicted injury upon a child under 8-years-old that was “especially heinous, atrocious, cruel or involved the infliction of torture.”

The child mentioned in the indictment is Stepp’s biological daughter, who has since been adopted by another family and undergone a name change.

On the third day of the trial, however, Sexton acquitted Ledford and Stepp of the third count. In his ruling, Sexton said that he believed the first two counts included the same injuries indicated in count three and added that he was concerned about confusing the jury with discussions about what legally constituted “torture.”

Andi Bridges and Lindsey Cadle prosecuted the case on behalf of the state, claiming that Ledford perpetuated the abuse and that Stepp was aware of her actions and made no effort to protect the child.

Throughout the trial, both attorneys emphasized the long term mental effects that the alleged abuse had on the child, not just the physical injuries in 2018, and implored the jury to stand up for someone who was, at the time, only 7-years-old.

The state’s case occupied three of the trial’s four days, and witnesses included multiple doctors, the child’s schoolteacher, an investigator with the Department of Children’s Services and the child herself, who testified that Ledford consistently abused her by beating her with her fists, a belt and a switch. She also claimed that Stepp was home when the abuse would occur and that he did not intervene.

The doctors, who separately interacted with the child in January and February of 2018, both expressed concerns of abuse in their reports and records.

Marymer Perales met with the child and Stepp in January of 2018 after a schoolteacher submitted a report to DCS because of bruises covering the child’s body. In her testimony, she recounted the sheer number of injuries, which she considered an indicator of abuse, even though some of the bruises on their own may have been considered “normal.”

She also specifically noted bruises caused by being hit with a looped object, such as a belt or cord, that are often consistent with physical abuse.

The other doctor who testified was Michael Riker, who treated the child at East Tennessee Children’s Hospital on Feb. 8, 2018, after she was transported to Knoxville by an ambulance.

Earlier that day, Stepp had brought the child to the family’s primary care provider, Jeff Mann, claiming that she woke up with severe swelling and a black eye. Mann diagnosed the injuries as a potentially life threatening sinus infection, recommending that he take his daughter to the emergency room at once.

When he called to check on the family later that afternoon and discovered that Stepp had not taken the child to the hospital, he called an ambulance and had them transported.

Riker disagreed with the sinus infection diagnosis, noting that, on the CT scan, there was a large amount of swelling full of blood between the child’s skull and skin on one side of her head. According to Riker, that type of injury would be caused by being struck hard multiple times.

Brian Sableman, who represented Ledford, attempted to prove that the jury could not convict Ledford because there were other explanations for what may have harmed the child and inconsistencies in the child’s story.

During the preliminary hearing, the child said that Ledford would ground her as a punishment; meanwhile, last week, the child initially claimed that Ledford never grounded her, only “beat her up.”

Sableman also asked about her relationship with her father, and the child told him that she loved Stepp. In his questioning, Sableman implied that the child might have accused Ledford of abuse because she wanted to return to living alone with her father.

He also alleged that Stepp was the one who had hurt her, again pointing to statements she had made during the preliminary hearing, including one that he would take her into his bedroom with the door closed and hit her with a belt.

When cross-examining Riker, Sableman followed the same strategy of blaming Stepp, noting that Stepp had been the one who allegedly lied to medical professionals about the cause of the injuries and neglected to seek proper care.

Additionally, Sableman mentioned that black eyes heal within two to three weeks, the child had no broken bones and that none of the injuries were permanent.

“If you’re implying that you need a permanent injury to be abused, then I’m going to say that you’re a lawyer and not a doctor,” Riker responded.

When it was the defense’s turn to call witnesses, Sableman had Ledford’s biological son, Ledford’s aunt and a friend of the family testify.

The son claimed that he and the child fought constantly and that he was currently in therapy for anger management, believing it possible that he caused some of the bruises to the girl.

Both the aunt and the family friend testified that Ledford did not abuse the child and that Stepp was a neglectful father, keeping to his bedroom and refusing to participate in childcare.

Feb. 8, 2018, was the nucleus of the case, according to Andrew Crawford, who represented Stepp. Like Sableman, Crawford attempted to question whether it was possible for the child to have been injured by something or someone other than Ledford or Stepp; however, he also argued that if Ledford was the perpetrator, Stepp was unaware of her actions and, therefore, not guilty.

During his cross-examination of the schoolteacher, for example, Crawford asked if he remembered a meeting in the spring of 2018, in which the teacher said the child “did not have the motor skills to kick a ball,” implying she could have been injured because she was clumsy.

Crawford also pointed out contradictions in the child’s statements, questioning why no one spotted and reported the abuse before January of 2018 if Ledford was hurting the child on a daily basis for at least a year prior, which the child alleged in her testimony last week.

In forensic interviews at the Children’s Center in 2018, the child’s recollection of the story was different than it was while on the stand during the trial, according to Crawford. Additionally, she underwent multiple forensic interviews, not just one, all of which had slight variations.

“Did you keep interviewing her until you got the answer you wanted?” Crawford asked.

Throughout the proceedings, Crawford pointed to Stepp’s financial status as an explanation for why he did not quickly seek medical care and asserted that he was not aware of the abuse.

Crawford did not call any witnesses to testify on Stepp’s behalf.