Sign Up
Log In
Purchase a Subscription
You have permission to edit this article.
Edit
Home
News
Crime
Obituaries
Opinion
Faith
Lifestyles
Sports
Special Sections
Classifieds
Eedition
Other Publications
Share This
1 of 2 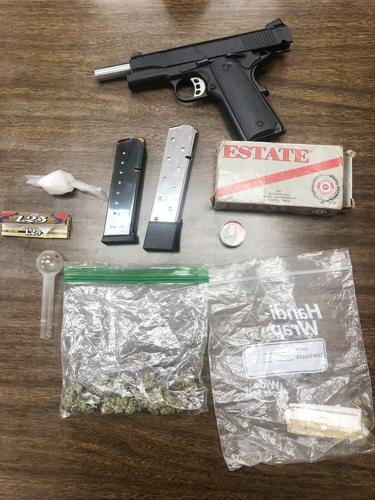 Chief Gary W. Perkins stated that on July 25, Captain Anthony Lay was working drug interdiction on Broad Street, Kentucky Street and North Main Street when a traffic stop concluded with the discovery of meth, marijuana and a firearm. Two were arrested.

Lay conducted a traffic stop in an alleyway off Fourth Street that runs parallel to Broad Street when a white male with a pinkish colored shirt exited a vehicle and quickly walked into a residence with a surrounding gate. Lay stated that the driver of the vehicle was blocking the alleyway and they were facing the First Volunteer Bank acting suspiciously.

Lay identified the driver as Robert Tilman Hatfield of LaFollette. After an interview with Hatfield, it was concluded that Hatfield had two bags of marijuana, a clear smoking pipe that contained meth and a .45 Tisas pistol with two loaded magazines of ammunition in his vehicle.

Lay’s investigation into the white male with the pinkish colored shirt revealed his name to be Kenny Allen Siler of Duff. Lay stated Siler walked into the back door of the residence of the fenced yard and stood in the doorway.

Siler was interviewed by Lay and a large bag of meth was confiscated in the doorway where he stood. Lay stated the meth weighed 6.33 grams and was wrapped in a clear plastic bag.

Siler was charged with the manufacture/sale/delivery/possession of meth.

Other recent drug arrests at the Jellico Police Department include: