Sign Up
Log In
Purchase a Subscription
You are the owner of this article.
Edit Article Add New Article
You have permission to edit this article.
Edit
Home
News
Crime
Obituaries
Opinion
Faith
Lifestyles
Sports
Special Sections
Classifieds
Eedition
Other Publications
Share This
1 of 3

A running play during the Blue and Gold scrimmage on May 17. 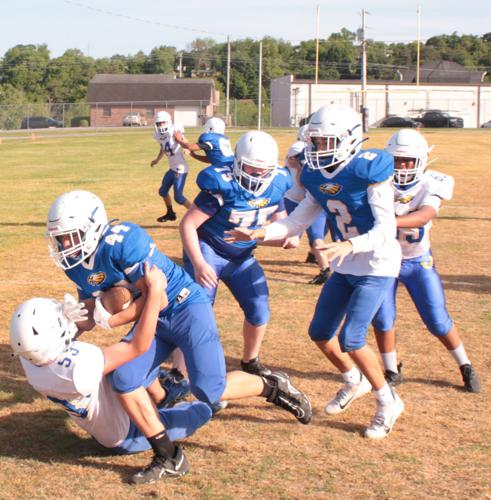 The Blue and Gold scrimmage took place at Jacksboro Middle School on May 17. 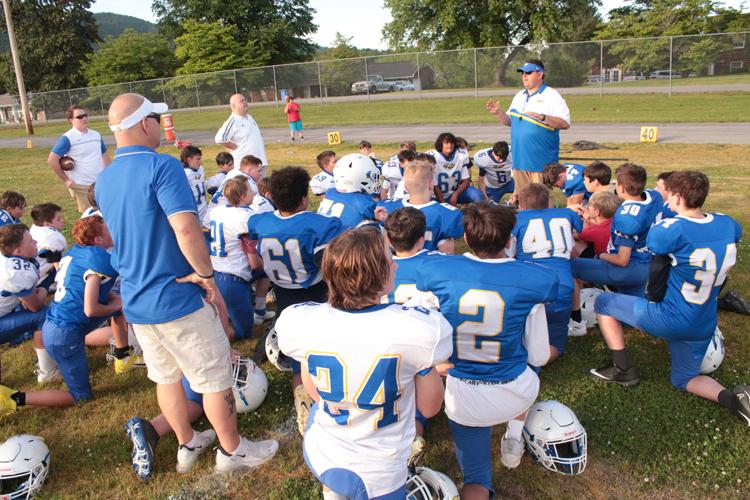 Jacksboro head coach Cody Parker talks to the team after the game.

A running play during the Blue and Gold scrimmage on May 17.

The Blue and Gold scrimmage took place at Jacksboro Middle School on May 17.

Jacksboro head coach Cody Parker talks to the team after the game.

The Jacksboro Eagles hosted their Blue and Gold intersquad scrimmage to close out spring practice on May 17.

“It was awesome,” Jacksboro head coach Cody Parker said. “You can’t take this stuff that serious. Your coaches will rib each other back and forth. In two weeks, these kids will forget about this. Tonight was just about letting them get in front of their parents and show them what they have been working on. Tonight is about getting them in front of their people and having a good time.”

The night started with both teams competing in 1-on-1s, followed by tug of war.

The blue team dominated the field events and led the gold team 8-2.

The gold team quickly got going during the game.

Hunter Turpin picked off quarterback Will Croley, and Sam Sexton scored on a touchdown reception for the gold team to take a 10-8 lead.

Croley tried to get the blue team offense going with a long scramble and he got into the gold side of the field, but Turpin snagged his second interception of the game to give the gold team the ball back.

“Will Croley did some good things for us tonight,” Parker said. “He had some turnovers at times, but when you’re throwing to different receivers and not in a routine, stuff like that will happen. Will has a really bright future with us. I think our seventh-grade class just has a lot of guys who will be good football players.”

After a quick offensive drive, Turpin punched in the touchdown on the ground and gave gold a 16-8 lead with 5:30 to go in the first quarter.

Another interception ended the offensive momentum of the blue team before the end of the first quarter. This time it was Brody Smith.

Sexton scored his second touchdown of the game, this time on an end around, and gave the gold team a 24-8 lead at the end of the first quarter.

“He has speed, and that’s just something you can’t teach,” Parker said. “He has wheels, and if he can become a complete receiver for us, then I think he can do some really nice things for us.”

The blue team found success at the beginning of the second quarter as Braydon Graham exploded through the line of scrimmage for a 70-yard touchdown run.

“I saw some bright spots up front as well,” Parker said. “Tony Phillips, Micah Cox, Isaac Kitts, Owen Blankenblicker and Peyton Brown, that is five pretty good linemen, and I am excited to see where they go from here.”

Bentley Gross also intercepted a pass in the second quarter, but the blue team trailed the gold team 24-14 at halftime.

The second half was a major stalemate.

Tyler Cook created a turnover early in the second half by way of an interception, but the blue team was unable to capitalize off of it.

Sexton added one more touchdown to his statline before the end of the game and gave the gold team a 30-14 victory over the blue team.

“I am really pleased with our spring practice,” Parker said. “We are really inexperienced. We have a lot of new faces that are out here maybe even for the first time, but they show up and try to get better. I am just really excited for this team’s ceiling.”