SEVIERVILLE — What started out as a domestic call at Frank Allen’s Market turned into child abuse and drug charges after officers allegedly found drugs hidden in a child’s toy bag.

Police were called to the convenience store Saturday night about a confrontation between a man and a woman.

They eventually found that 29-year-old Brittany Lynn Hutchins, of Kingsport, had been fighting with 34-year-old Brett Ryan Tipton, of Gray, Tennessee.

Videos showed that Hutchins had dropped Tipton off at the convenience store, but she didn’t stay away long.

“Within less than a minute Ms. (Hutchins) is seen on video driving back to Mr. Tipton where they both shoved and struck each other,” according to arrest warrants.

Tipton had multiple, fresh scratches on his face and neck, the warrants said.

During the investigation, officers found that Tipton had fled and tried to dispose of some drugs in an unusual fashion, according to the warrants.

“It was discovered Mr. Tipton ran into the bathroom to destroy three small packets of cocaine in his possession,” the warrants state. “Mr. Tipton placed the packets in a urinal and did urinate on them.”

Hutchins gave the officers permission to search her car, where her 8-year-old daughter was sitting.

They found a bag in the child’s reach that mostly contained items belonging to her, but they also found drugs amid the toys and stuffed animals, according to the warrant.

“The search also found a similar pink bag, inside the child’s bag, that contained approximately 10 grams of marijuana, two marijuana grinders and a straw with white drug residue on the inside of it,” the warrant states.

Also inside the bag was a prescription drug bottle with Tipton’s name on it, according to the warrants.

Officers charged both Hutchins and Tipton with aggravated child abuse under Haley’s Law, which makes it a felony to put a potentially dangerous item in reach of a child under 9.

The pair are also charged with domestic assault, simple possession, and possession of drug paraphernalia.

Tipton is facing an additional charge of tampering with evidence.

They were being held Monday at the Sevier County Jail.

Sevierville Director of Parks and Recreation Bob Parker leads the Tri-County Trailblazers on a walk along the West Prong Greenway on Monday morning.

Bob Parker stops to tell the Tri-County Trailblazers about the McMahan Indian Mound on the greenway.

The Tri-County Trailblazers is a program created by the Family Consumer Science UT Extension agents in Sevier, Jefferson and Cocke counties.

The Tri-County Trailblazers only have a couple of trips left in their 2022 walking season.

They made their final trek through Sevier County on Monday, taking the almost 3-mile West Prong Greenway from City Park to Main Street and back, led by Bob Parker, director of Sevierville Parks and Recreation.

They meet again on Aug. 22 at Parrottsville Recreation Memorial Park in Cocke County and then the final excursion of the year on Sept. 26 at the Field of Dreams Activity Center in Jefferson County.

Tri-County Trailblazers is a group created by the Family Consumer Science UT Extension agents in Sevier, Jefferson and Cocke counties. From April through September they schedule a different location to take a walk monthly while learning about the history or other interesting facts of the area. Already this year they have walked at the Sugarlands Trail in Gatlinburg, the Newport Greenway and Cherokee Dam.

“It’s physical exercise, socialization, and also an opportunity to learn in the different counties where people can actually go and enjoy the outdoors, because so many times we go to work everyday and we’re busy and we think we have to go somewhere else to walk, but we’ve got wonderful places to walk in each of these counties without driving real far away,” said Linda Hyder, Family Consumer Science agent for Sevier County.

The West Prong Greenway is one section of the city’s greenway system, which totals about 12 miles of paved walking trails for residents and guests to enjoy. It was the city’s first greenway, opening in March of 1998. Parker told the attendees there are plans for the city to build additional greenways, though they take time to be completed, costing about $1 million per mile to construct.

Tri-County Trailblazers gives participants an opportunity to improve their overall health while meeting new people and seeing new places that are close to home.

PIGEON FORGE — Boys & Girls Club of the Smoky Mountains’ supporters can leave their golf clubs at home when they come to a wholesome family-fun event at the Professor Hacker’s Lost Treasure Golf on Wednesday, Aug. 3.

It’s a fun and unique event for everyone.

“I think it is a great thing for people not into regular golf and at a price point different than our regular golf tournament,” said Karen Robinette, Resource Development and Marketing Director.

It’s a great way to have fun and give back to a worthy cause, especially for those with a busy schedule.

“The have fun doing it and it doesn’t take a lot of time. You don’t have to take a full day off work,” Ross said.

The tournament starts at 9 a.m. with a breakfast provided by The Old Mill at 8:15 a.m.

Robinette said they will have prizes for first, second, third and even something to recognize last place.

The cost to participate is $150 for a four-person team, which includes breakfast, a round of mini golf and a T-shirt.

Board member Katie Sidwell, a co-owner of the course, first suggested the tournament, which is in its third year.

For more information about this event and other upcoming fundraising efforts, contact Robinette at 865-428-6550 or by email at krobinette@bgcsmoky.com.

A portion of Jones Cove Road near Wilhite Road is closed due to flooding.

JONES COVE — A portion of Jones Cove Road is closed due to flood waters washing away the bridge at Wilhite Road.

Ayers said TDOT engineers are assessing the damage. TDOT is saying this will be a long-term closure and detours are currently being set up.

Ayers said the damage is an illustration of why it’s important not to drive over flooded roadways.

“This is a good example to encourage people to not drive over water-covered roadways because you don’t know what has happened to the roadway underneath,” Ayers said.

“Even though you have driven that road many times before, in a situation like this with the water covering the roadway you could easily drive over that and find yourself submerged or swept away.”

Ayers said that precaution could not just protect the drivers but also the emergency responders who would need to rescue people who have driven into flooded waters.

Ayers said more flooded roadways may be in the future.

“We have more rain like this coming through. The ground is saturated so the rain is not going to get absorbed,” Ayers said.

PIGEON FORGE — A 32-year-old Kodak man died Saturday when he allegedly ran a red light and collided with a car while fleeing Sevier County Sheriff’s deputies.

Zachary Gorman was traveling north on Veterans Boulevard and was being pursued by deputies from SCSO when he approached the light at McCarter Road, according to a preliminary report from Tennessee Highway Patrol.

“(Gorman) ran the red light striking vehicle #2 which was making a left turn to travel north on Veterans,” according to the THP report.

“(Gorman) was thrown from the bike and rolled under (a third car).”

Debris from the bike struck another car in the area, according to the report.

Chief Deputy Michael Hodges said they could not comment yet Monday on what led up to the pursuit.

Emergency response to the wreck and the subsequent investigation disrupted traffic for hours on the busy road. 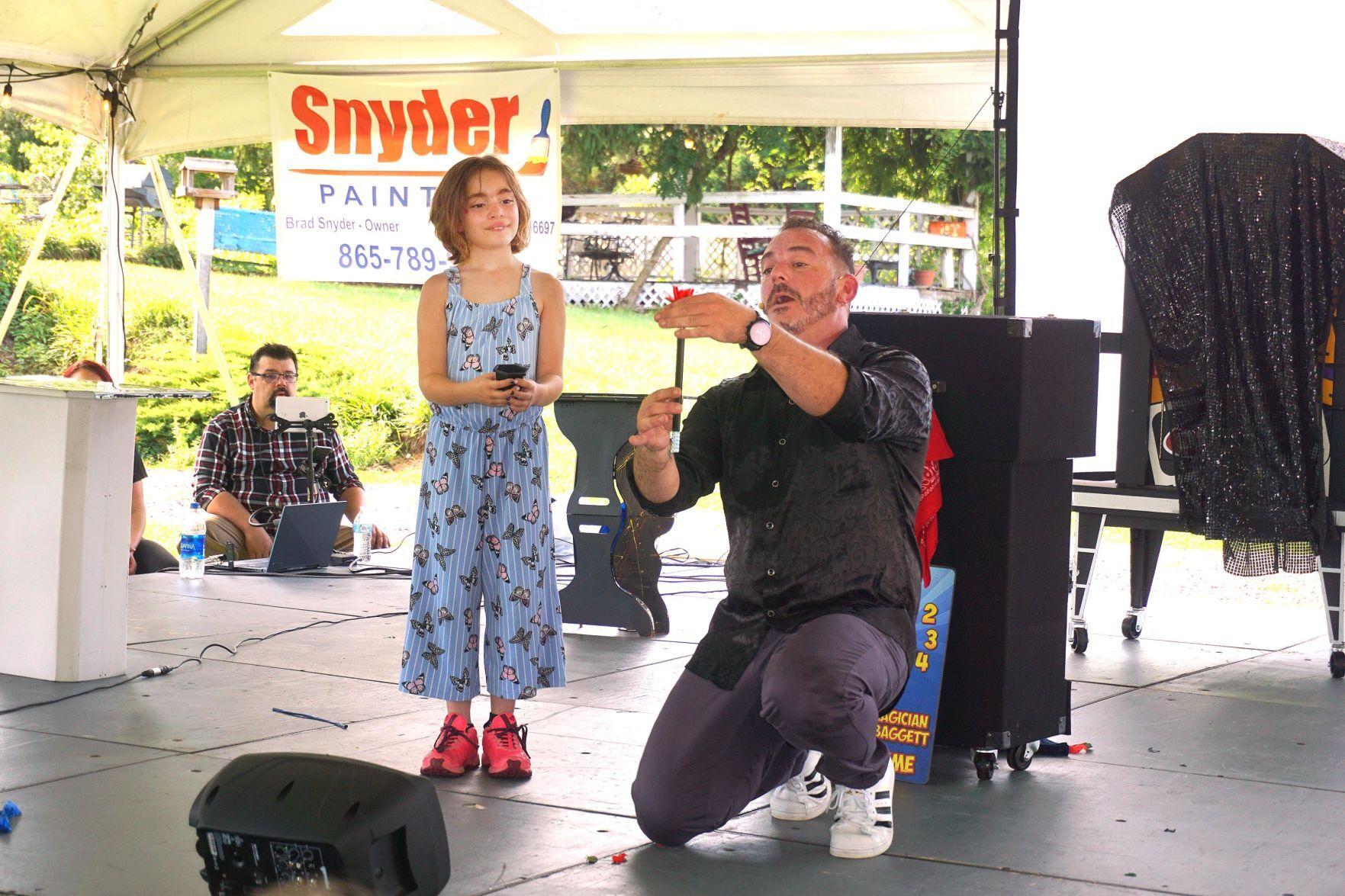 Katana Lawlisi watches magician Brandon Baggett, one of many entertainers who were at Blue Mountain Mist Country Inn and Spa this weekend. The inn has been open 35 years, and organizers are celebrating the milestone with several days of events, culminating on Wednesday with entertainers including Jimbo Whaley and Friends and a fireworks finale.