SEVIERVILLE — Chick-fil-A has gotten a permit to build a new restaurant at the Smoky Mountain Gateway location, and so has Freddy’s Frozen Custard and Steakburgers.

Chick-fil-A currently has one location in Sevierville, in front of the Walmart on the Parkway. It’s a popular spot, with cars often wrapped around the building to get to the drive-thru.

“We have approved a Chick-fil-A,” said Dustin Smith, development director for the city.

“It is located on the north out-lot at the Smoky Mountain Gateway/Publix development.”

They’ve already issued a building permit for a 5,000 square foot restaurant on the site.

The chain has issued a statement saying they plan to open the new location next spring.

We look forward to serving all of our guests delicious food in an environment of genuine hospitality,” they said.

The city has also issued a building permit for a new Freddy’s Frozen Custard and Steakburgers for the lot south of the Chick-fil-A location, Smith said.

Freddy’s Frozen Custard, like Chick-fil-A, has a restaurant on Chapman Highway not far from the Sevier County line.

It will be their first restaurant in Sevier County.

That area of Winfield Dunn Parkway is primed to see considerable growth over the next few months and years. Rocky Top Ford has started work on a new location in the same area, and Target purchased land in the same area this year.

The family of Norman L. Burchfiel remove a covering to show the new sign dedicating a bridge in their patriarch’s honor. Burchfiel was a Sevier County commissioner and owned much of the land in that area on Veterans Boulevard. Sevierville Mayor Robbie Fox, far left, watches the family, who are Burchfiel’s granddaughter, Jaclyn Kile; daughter, Emily Kile; and granddaughter, Julie Clinton.

Sevierville Mayor Robbie Fox presents a proclamation to the family of Norman L. Burchfiel at a bridge dedication in his honor. They are granddaughter, Jaclyn Kile; daughter, Emily Kile; and granddaughter, Julia Clinton.

SEVIERVILLE — One of Sevier County’s prominent figures in its history was recognized by the renaming of a bridge that sits in the midst of what was once his farm.

Sevierville officials and the family of Norman L. Burchfiel gathered for a bridge dedication in his honor on Monday. The bridge is on Veterans Boulevard near the intersection of Middle Creek Road.

“My Daddy would be so thrilled. You are sitting right in the middle of Burchfiel property here,” his daughter, Emily Kile, said.

The area on Veterans where the bridge sits once consisted largely of farmland owned by the Burchfiels.

Kile’s dad served the county in a variety of capacities, including as a Sevier County commissioner for 12 years. He organized First Federal Savings and Loans, acting as its CEO 20 years, and he also was a member, president and Paul Harris Fellow in the Sevierville Rotary Club.

He was also a Mason, Shriner and Elk. He was also dedicated to philanthropic work, including Walters State Community College, the Robert F. Thomas Foundation and Boys & Girls Club of the Smoky Mountains.

His community spirit is something carried on by Kile and her children, daughters Jaclyn Kile and Julia Clinton, and her granddaughter Landis Clinton, who is named for her great-grandfather.

“He cared about people. He wanted to make things better. He would be thrilled they put his name on this,” Kile said.

Sevierville Mayor Robbie Fox said that the city first approached the General Assembly and then TDOT was involved in the process of getting the state bridge renamed.

He thanked state Rep. Dale Carr, in particular, for his work to see it done.

He expressed appreciation to the Kile family, in particular Emily, who has followed in her father’s footsteps with her service to the community.

“It is important to recognize those who came before us and made contributions to the city of Sevierville and Sevier County. This is very important to our success. They laid the groundwork for our future,” Fox said.

SEVIERVILLE — The Sevier County Board of Education approved the budget for the remaining federal dollars the school system was awarded in response to the COVID-19 pandemic.

The board also approved the “Safe Return to In-Person Instruction and Continuity of Services Plan Addendum,” a plan required after the pandemic to address returning to school safely.

School districts are required to update those safe return to in-person plans, said Stacia Lewis, Assistant Superintendent of Curriculum and Instruction. Those plans are required to be updated every six months through September 2023.

Lewis said they engaged with stakeholders on the plan as well as how to spend the remaining federal funding for schools in a variety of ways, including websites, groups, robocalls and more.

The money, which alots what is called Emergency Relief for Schools (ESSER), includes approximately $4 million to fund things like tutoring, summer programming, early reading, intervention for those struggling in language arts or math, textbooks and other learning material.

Other items include student readiness, which encompasses items including AP courses, pre-ACT testing, special populations (including intervention for English learners and students with disabilities, and mental health). The budget for those items is approximately $922,000.

“We have increased our support of students through additional school counselors,” Lewis said.

The new bridge over Wilhite Creek is taking shape, and officials say it’s on schedule to reopen at the end of the year.

JONES COVE — Crews are still on schedule to finish work on replacement of the bridge where Jones Cove Road crosses Wilhite Creek, as the new bridge is starting to take shape.

A flash flood swept out the old bridge in July, forcing detours for drivers who used it to reach Sevierville or Cosby.

TDOT hired local contractor Charles Blalock & Sons to build the replacement bridge through an emergency contract, and already started buying supplies for the work before the contract was awarded.

Now residents can see the new bridge starting to take shape, and Blalock owner Doug Blalock said they’re still on pace to have a one-lane bridge opened by Thanksgiving and both lanes fully opened by Christmas.

“I think it’s on schedule; we really haven’t’ had any glitches yet,” Blalock said.

“The beams are set that the state provided and they weren’t supposed to be there for another couple of weeks so that’s encouraging.”

Right now they need the metal decking that will go on top of the beams, which he said should be delivered this week.

They still need to get all the materials on time, and to continue having good weather, but for now Blalock said they should be able to finish work by the end of the year. 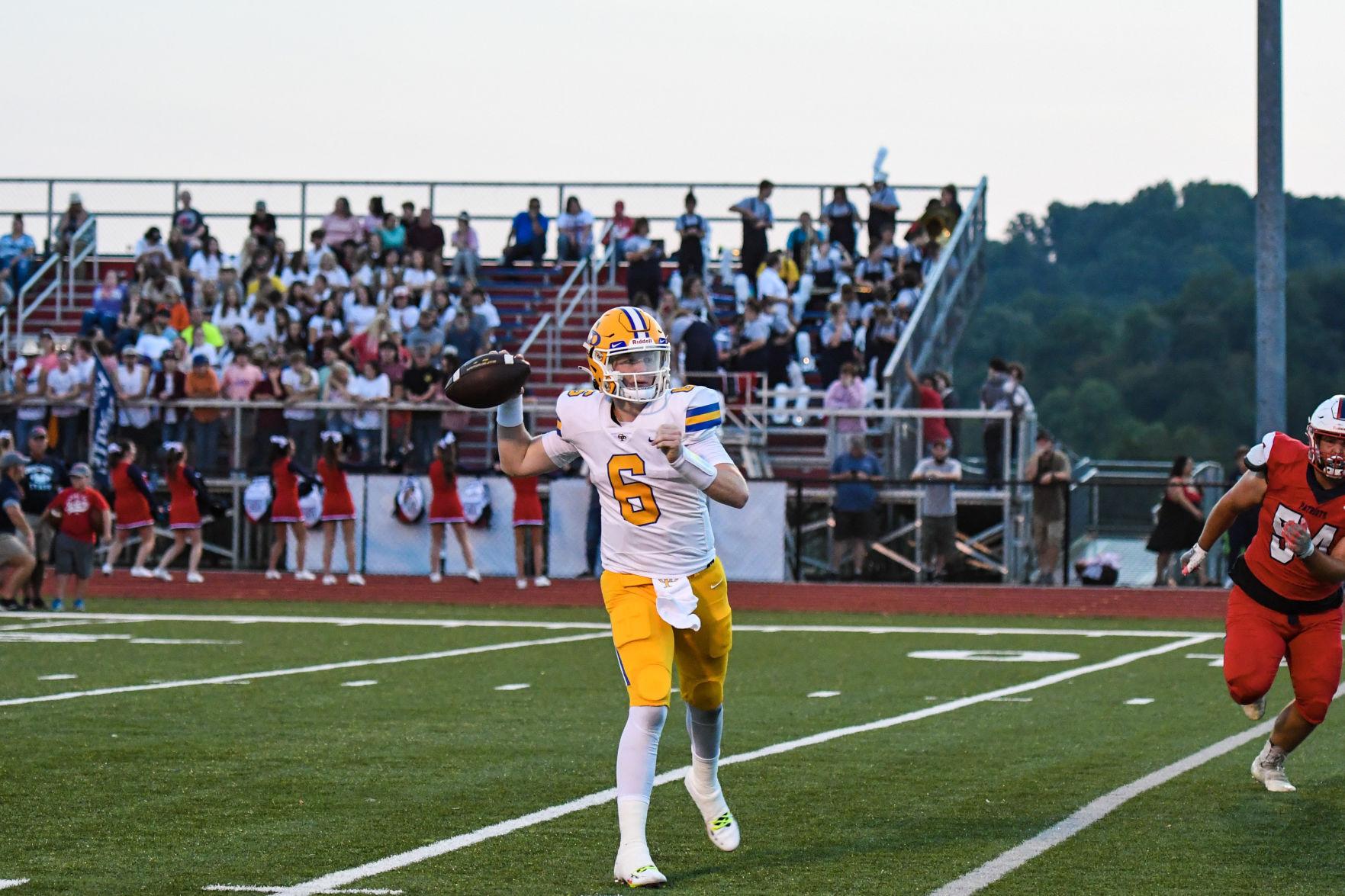 Brady Hammonds looking for an open receiver downfield. Hammonds would connect on two touchdown passes in the first half.