News
Feds give life sentence for dealer in fentanyl OD

KNOXVILLE — A Sevierville man will spend his life in prison on federal drug charges that stemmed from his part in the fatal overdose of a Kodak man on Thanksgiving 2018.

A jury convicted Williams after a four-day trial last year, finding he was guilty of multiple drug trafficking charges and illegal possession of a firearm.

The two were charged after a Kodak man died of an overdose of fentanyl and meth in 2018, according to court documents.

Facts laid out in Catlett’s written plea agreement said that on Nov. 21, 2018, the victim called Catlett looking to score some heroin.

Catlett called Williams and met him at a store on Newport Highway.

“Williams warned (Catlett) ‘to be careful with the stuff,’ ” according to the court documents. “Williams informed (Catlett) that the substance was fentanyl and that ‘fentanyl is what people like because it’s strong and he would rather serve fentanyl because you get more out of it.’ ”

Catlett told the victim what Williams had said, and injected the drug along with the victim and two other people, the agreement said. That afternoon “(the victim) immediately began having trouble breathing and turned blue,” according to the agreement.

On that day, the victim recovered after another person in the car injected him with methamphetamine.

However, no one took the rest of the drugs purchased with him.

The victim died of an overdose the next morning.

A release from the Department of Justice indicates that Williams had sold drugs to confidential informants on other occasions before his eventual indictment, as Sevier County officers and federal law enforcement were investigating him. 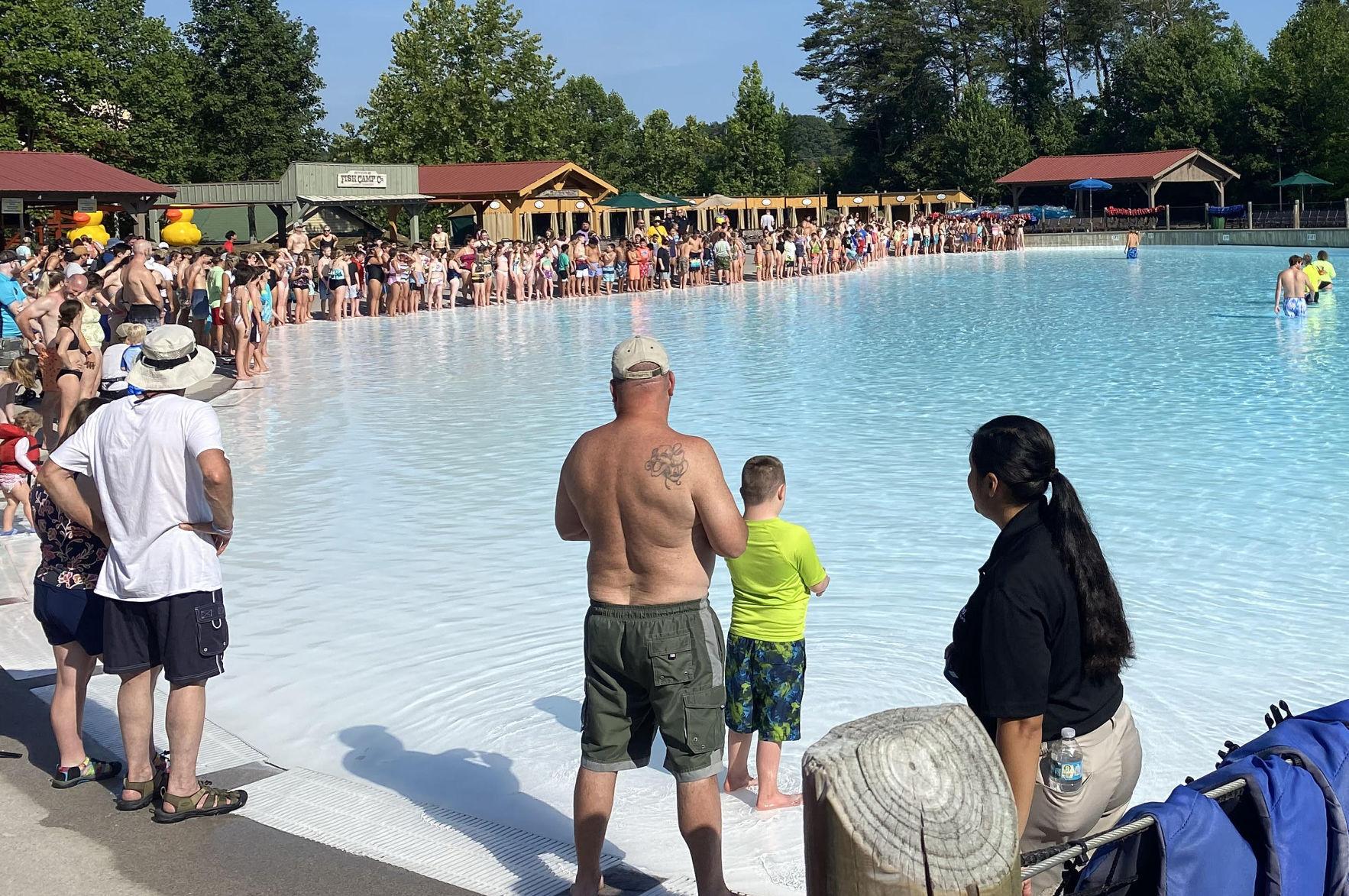 Swimmers line up for the world’s largest swimming lesson at Dollywood’s Splash Country on Thursday. The waterpark and LeConte Medical Center observed Water Safety Day 2022 to raise awareness about drowning, the leading cause of accidental death for children ages 1-4. Drowning is the second leading cause of death (only behind car wrecks) in children 1-14 years old. Dollywood’s Splash Country is passionate about awareness and education because swim lessons can reduce the risk of drowning by 88%.

“Christy is the first awardee from Sevier County. Christy is an outstanding teacher who takes her job to heart. She had a rough childhood and God led her through it, helping her to be able to relate to her students who may be having hard times,” said Edna Loveday Rogers, director of the Chasing Rainbows Award.

Maples, who teaches third grade at New Center, has earned the respect of her peers and leaders in the Sevier County School System.

“Mrs. Maples’ classroom environment is always conducive to learning. She is always inspiring, caring, nurturing, motivating, creative, challenging, engaging, and encouraging. Christy has taught for 28 years and God took her many challenges and molded Christy into the prize-winning teacher she is. Christy, like Dolly, is a true example of what this award is meant to be,” said Nancy Sims, former principal at New Center.

A letter of recommendation states, “Christy Maples is a true hero within our community. She is not only a teacher, but she is a mentor, social worker, friend, and a loving adult.”

A former student said he considers “Mrs. Maples to be one of the greatest positive influences in my life. She taught me to be a leader and more importantly, to always be kind.”

Dolly Parton’s Chasing Rainbows Award is awarded to one applicant from across the United States. This award is special as the guidelines are: “A teacher who has overcome obstacles in his or her life, and like Dolly, is making a difference in the lives of children.

‘Dolly’s “rags to riches” story definitely tells of her overcoming such obstacles and she was awarded the first Chasing Rainbows Award by Rogers, who was the 1989 Tennessee Teacher of the Year, at the opening of the Chasing Rainbows Museum at Dollywood on April 5, 2002. Now Dolly presents this prestigious award each year to the deserving teacher.

WEARS VALLEY — Appalachian Bear Rescue has named a bear cub Little Trouble for the effort it took to help it out after it got its head stuck in a plastic jug, and Director Dana Dodd said it helped to illustrate the big trouble unsecured trash causes for bears.

TWRA and Appalachian Bear Rescue spent a week tracking the cub before catching her Tuesday, with some volunteers spending more than 100 hours trying to find the scared cub.

Residents and passersby spotted her last week and said at the time she was still roaming with her mother and two other cubs.

ABR and TWRA tried to keep volunteers and personnel in the area to reach her when she was spotted, but she had usually disappeared by the time they arrived.

By the time personnel tracked her down, she was separated from her mother and siblings and her head was still stuck inside the jug.

Kim Delozier, who works for ABR, finally spotted the bear Tuesday as she climbed a tree and was able to get her to climb farther up and basically keep her treed until they got more help to her.

They needed to tree her to finally catch her, but that made removing the jug more complicated. Goats on the Roof supplied an extension ladder, and Janelle Musser of TWRA made the climb up to finally help Little Trouble wriggle free.

“Once they get their whole head in there, it takes a whole lot of force to get out and they’re usually not strong enough to hold it with their paws and get out,” Musser said.

“Once you get tension on the jug, the bear can get its ears out,” she said.

A little while later, they were able to corral the cub and take it to ABR, where they will make sure she’s healthy before releasing her back into the wild.

So far, the news has been good, Dodd said. Little Trouble was a little dehydrated, but the vet hasn’t found any other issues for the 5-month-old cub.

Since she’s been separated from her family, they’ll keep her until she’s ready to go out into the wild on her own.

There are lots of bears in the area, including sows with two cubs, so they can’t reunite her with her mother.

“Just because you find them in the vicinity doesn’t mean it’s the right ones,” she said. “Choosing the wrong one could be deadly.”

At the same time they were bringing in Little Trouble after her ordeal, they took in another three cubs that were orphaned when TWRA had to euthanize their mother.

“They came from very much the same area,” Dodd said. “Their mother had become habituated to unsecured trash at a rental cabin and after becoming very bold about getting that trash, she ended up breaking windows out of cars to get more trash.”

They believe all those incidents may tie back to one cabin where the owner doesn’t have the trash receptacles bear proofed, she said.

They got calls last month from renters who said a cub was stuck in a bin, and while the bears were all gone by the time they got there, it was clear bears had been in the area.

It appears the orphaned cubs and their mother had been around that cabin, she said, and they think Little Trouble had as well.

Wherever the bears got around the trash, the events were set in motion because of unsecured garbage in bear country and that’s something Dodd hopes to see change.

“One little cub suffered for seven days, three cubs were orphaned and one mother bear had to be euthanized.”

News
Gatlinburg rings in Fourth of July with Patriotic celebration

GATLINBURG — The nation’s “first” celebration and Gatlinburg’s award-winning Fourth of July Midnight Parade will step off at 12:01 a.m. on Monday, July 4.

Parade-goers can enjoy a celebration of red, white, and blue commemorating the Independence Day holiday as festive floats decorate the downtown Parkway. The celebration will also include a musical performance by the 100th Army band from Fort Knox, Kentucky, and a spectacular firework display.

“American Idol” runner-up and rising country music star HunterGirl will lead the festivities as the official grand marshal of Gatlinburg’s annual parade. The Winchester, Tennessee native shares a deep respect for the nation’s veterans, as she works with many music therapy organizations such as Freedom Sings USA and Operation Song, giving life to veteran’s stories through her lyrics. Her unique talent for songwriting is delivered through her powerful vocals, winning hearts of not only judges, but crowds of music lovers. HunterGirl has played in renowned Nashville venues since only 18 years of age, but recently took the stage at CMA Fest, performing her chart-topping hit, “Red Bird.”

The parade route begins at Baskins Creek Bypass and travels the length of downtown to traffic light #10 at Ski Mountain Road. Parade goers are encouraged to arrive early on Sunday, July 3, to secure a place to watch the midnight parade along the Parkway. Events continue through July 4, beginning with the River Raft Regatta.

The annual River Raft Regatta, Gatlinburg’s unmanned floatable objects race, will begin registration at 11 a.m. at the former Christ in the Smokies Museum. The race will set sail at 1 p.m. and finish when all floatables have crossed the finish line at Ripley’s Aquarium of the Smokies. Those wishing to participate in the race may do so by purchasing a single rubber duck for $2 or 3 for $5. Winners in several different categories will receive official trophies.

The 100th Army Band from Fort Knox, Kentucky will provide entertaining performances over the course of the holiday. The band will perform throughout the afternoon on July 3 at The Village, Reagan Terrace Mall, Ripley’s Aquarium of the Smokies, and the Gatlinburg Convention Center.

The band will lead off the festivities the next day with a July 4th performance at 10 p.m. in Shade Tree Lot, located at 120 Historic Nature Trail, sparking excitement for the Fireworks Finale.

Beginning at 11 p.m., the Fireworks Finale will mark a celebratory end to the night. With a simultaneous display from the Gatlinburg Space Needle and Gatlinburg Convention Center, spectators can view the spectacular show from any vantage point in Gatlinburg.

For more information on Gatlinburg and upcoming events, visit Gatlinburg.com/events.