PIGEON FORGE — Police here have charged a 75-year-old local man with voluntary manslaughter, saying he fatally shot a man who lived at the same residence on Sugar Hollow Road.

Investigators filed the charges against Bobby Rauhuff on Wednesday afternoon.

Both men were living at a house on Sugar Hollow Road, which Sevier County records show is registered to Rauhuff.

“(Lowe) had been living at that residence when the incident occurred and the two of them got into an altercation,” Lt. Matt Pendleton said.

The affidavit did not indicate what caused the struggle, and Pendleton said detectives are still trying to learn what led up to it.

Police previously reported that they responded to the scene at about 6 a.m. Monday, after getting a call about a shooting.

When they arrived they found Lowe dead at the scene.

Smoky Shadows Service Unit Girl Scouts work on Christmas ornaments to go on a tree at the Festival of Trees in Gatlinburg.

Girl Scout Troop 20648 out of Gatlinburg decorate a tree at the Festival of Trees in the W.L. Mills Conference Center in Gatlinburg.

Smoky Shadows Service Unit Girl Scouts gathered on Nov. 20 to create and decorate Christmas tree ornaments. Gatlinburg Girl Scout Troop 20648 then took the ornaments and decorated a tree at the Festival of Trees in Gatlinburg.

“It’s good to see the girls do things besides selling cookies. There is more to it than that. It’s building character. It’s helping girls find their voice. It’s about sisters,” said Delea Patterson, service unit co-manager and Gatlinburg’s Troop co-leader.

The Festival of Trees is going on now through Sunday, Nov. 28, and features elaborate Christmas trees and decorations, visits with Santa, and take-home crafts for the children from 10 a.m. to 7 p.m. daily; 10 a.m. to 4 p.m. on Sunday, Nov. 28. The event is at the W. L. Mills Conference Center at stoplight #8, Historic Nature Trail, Gatlinburg. Proceeds benefit the Boys & Girls Club of the Smoky Mountains and the Gatlinburg Chamber of Commerce Foundation.

The original theme was Arctic Animals, but the girls in the troop wanted more variety in what they could create, Patterson said. The theme then changed to cold weather animals. Girls from seven different troops were able to participate in this event and they had enough supplies for each girl to create their own ornament.

Besides decorating a tree for the festival, the troops will hold a Christmas party. At the party, the girls will paint rocks to donate to the Isaiah 117 House for a rock garden. Isaiah 117 House is a program that provides support and shelter for children awaiting a foster home.

Another troop is planning a father-daughter dance, accepting donations for the Isaiah 117 House.

“My troop is very much community service. We enjoy flag ceremonies and helping out,” Patterson said.

Along with holiday events, these troops also participate in community events and projects. Girls from Patterson’s troop are currently working on an engineering journey, where they will put together STEM kits for school.

GATLINBURG — A local man is facing charges of aggravated domestic assault and reckless endangerment after allegedly shooting at family members at his apartment Tuesday.

Two Gatlinburg Police officers were in the area of Reagan Drive when they heard a gunshot nearby, according to affidavits filed in court.

When they started to search the area they encountered three people, including a juvenile teen, who told them they had been visiting Clyde Matthew Thompson when he allegedly pulled a gun on them and pointed it at them while they were in an apartment.

They told officers That Thompson fired a shot after they fled the apartment, according to the warrants.

The Mountain Press does not generally disclose the names of alleged victims of domestic violence.

The officers took Thompson into custody, and he was being held Wednesday at the Sevier County Jail on three counts of aggravated domestic assault and three counts of reckless endangerment.

PIGEON FORGE — The city commission has voted on the route for the Westside Connector, but it will still be several years before work can start.

City Commission voted 3-0 Monday to approve a route that takes the road from. Mayor David Wear abstained from voting on the route because family members own property that will be affected by the decision. Commissioner Kevin McClure didn’t attend Monday’s meeting.

The connector is meant to run from Wears Valley Road to Mill Creek Road, and it will empty out onto the Parkway alongside

The city had already outlined much of the route, but was reviewing options for the stretch running from the area near Freedom Baptist Church to near Singing Pines road.

After offering two options at a public forum, the commission settled on a “hybrid” that runs south of the church and Pigeon Forge Care and Rehab, then cuts north and before running parallel to the creek.

The maps viewed so far provide a general idea of the route, but officials said the impact on property along that route could change as they collect more data.

It will take at least a year to have specific design plans, and after that they will have to negotiate with an estimated 48 property owners, Mize said.

They will also have to work with the Federal Emergency Management Agency on the ways a new bridge over the creek and road along it will alter floodways, he said.

“You’re probably three years away from construction,” he said. “We’re early in the process. It’s a long process to build a road.”

Several residents attended Monday’s meeting, but only two spoke about the proposed route during public comments.

One person said she hadn’t heard about the proposal until the past few days, and noted the design would run through a corner of her property.

Another just asked to see the map of the route.

Mize noted that the maps were based on preliminary information; the way it runs over some property could still change as they start surveying and collect additional data.

While he didn’t vote, Wear did comment on the route, saying he believed the city came up with the best compromise.

“I think the route is the best compromise we could come up with between all he parties,” he said.

SEVIERVILLE — The Mountain Press’ Santa Fund kicked off this week, raising money for the Boys & Girls Club of the Smoky Mountains and senior citizens in the community.

Citizens National Bank once again kicked off the effort to raise money for the Santa Fund with a $5,000 contribution.

“We are extremely proud to be able to continue this tradition and kick-off the campaign with a donation of $5,000 for the 25th consecutive year,” said Jason Holliman, President of Citizens National Bank. “With more people facing additional needs and hardship this holiday season, it’s more important than ever to support each other during this time of year.”

The Santa Fund was started in 1996 by former publisher Bob Childress and has continued with the current publisher of The Mountain Press, Jana Thomasson.

“We are so thankful to Citizens National Bank for kicking off our campaign each year,” Thomasson said. “The people of Sevier County have always been generous with their giving during the holidays.”

The charitable funds are collected by The Mountain Press and administered by Douglas Cherokee Economic Authority.

The deadline for donations is Friday, Dec. 17. 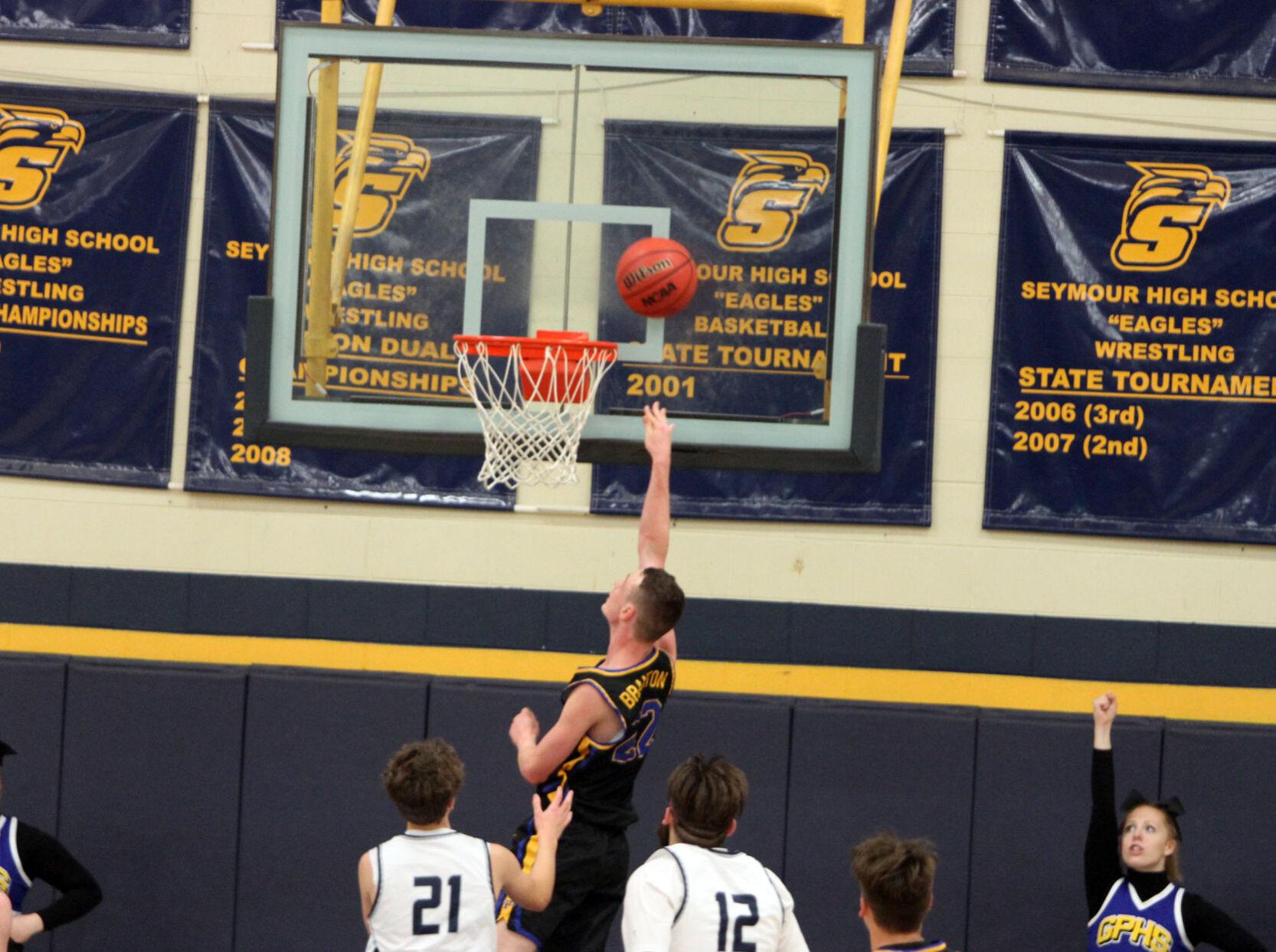 Gatlinburg-Pittman’s Grady Branton puts a shot up off the glass in their win over Seymour on Tuesday night.